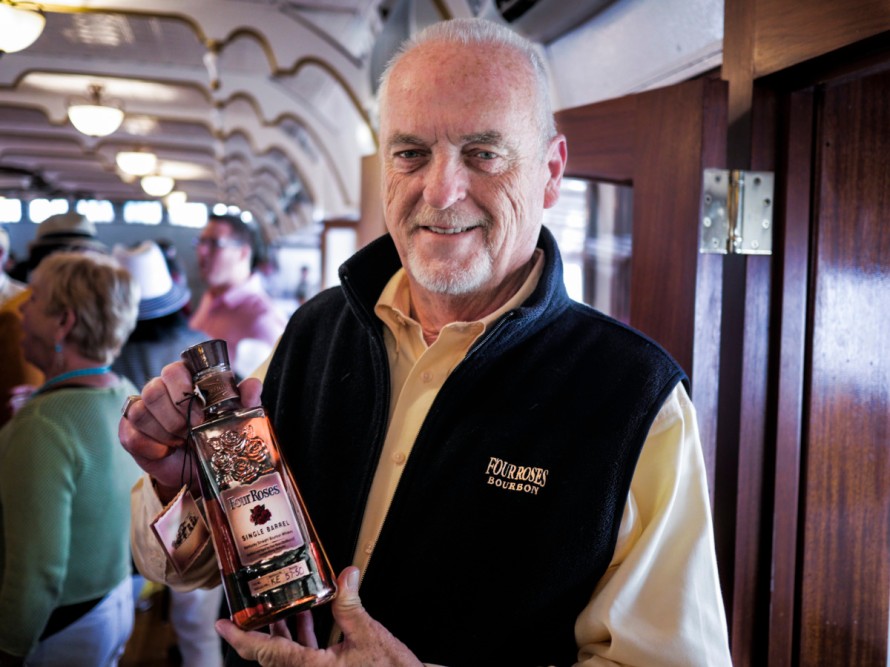 Louisville, Kentucky – October 13, 2016: The Bourbon Crusaders and Mint Julep Tours, in conjunction with the Crohn’s and Colitis Foundation of America, are hosting a Charity Silent Auction and Celebration to honor Jim Rutledge for his 50 storied years in the whiskey industry.

Jim Rutledge has been intimately involved in the creation of quality bourbon since 1966. After starting in Research & Development for Seagram Company, Jim quickly rose through the ranks. When Seagram sold the business to Japanese alcohol titan, Kirin, in 2001, Jim stepped up and took on the greatest challenge of his professional career. Through Jim’s drive and commitment to Kentucky Bourbon, one of America’s great bourbon brands was brought back to American shelves after decades of absence: Four Roses.

It was Jim’s vision and insistence for quality that turned Four Roses from a bottom shelf mixer to one of America’s great premium bourbons. In 2001, Jim Rutledge was inducted into the inaugural class of the Kentucky Bourbon Hall of Fame. He was given a “Lifetime Achievement Award” by Malt Advocate Magazine in 2007, and Whisky Magazine named him “Whisky Ambassador of the Year – American Whiskies” in 2008. Whisky Magazine also named Four Roses to its Icons of Whisky America Hall of Fame in 2012.

In 2015, Jim retired from Four Roses as one of the most decorated Master Distillers in American history. The bourbon world was thrilled when Jim announced the formation of the J.W. Rutledge distillery in 2016, where he will soon be producing high quality bourbon and rye whiskeys in Kentucky.

All net proceeds are going to support the Crohn’s & Colitis Foundation of America (CCFA), a foundation near and dear to Jim Rutledge and his family. A portion of ticket prices are tax-deductible,
and the CCFA will be providing receipts.

Wall Street Journal-bestselling author Fred Minnick will serve as the master of ceremonies for the main event. The event will include food from The Silver Dollar and sweets from renowned chef and Chef-in-Residence at the Woodford Reserve Distillery, Ouita Michel of Holly Hill Inn and Midway School Bakery, special limited whiskies for tasting, a rare whiskies silent auction, and a tribute to Jim Rutledge.

Gold tickets ($250) include all of the above, plus early VIP entry and meet-and-greet with Jim Rutledge, half barrel stave signed by Jim Rutledge, additional Gold-Level limited whiskey samplings, a commemorative whiskey glass, the opportunity to leave Jim Rutledge a personal message in the event program, door-prize raffle tickets, and free entry to The Silver Dollar After Party.

Some of the whiskeys being poured at the event include (subject to change):

Tickets and additional event details are available at: http://bourboncrusaders.com/jim50/

To make a direct donation to the CCFA please visit: http://www.ccfa.org/chapters/kentucky

Please contact us if you would like to sponsor portions of the event or donate items for the event or silent auction.

About the Bourbon Crusaders – The Bourbon Crusaders is a diverse group of avid American whiskey enthusiasts. Our goal is to maintain the honor, respect, and tradition of American Whiskey, and have fun doing it. A natural curiosity to learn more and share those truths with other fans is what drives our interest. We are passionate about giving back to the community through charity events and donations centered around the great American spirit.

About Crohn’s & Colitis Foundation of America – The Crohn’s & Colitis Foundation of America (CCFA) is a non-profit, volunteer-driven organization dedicated to finding the cures for Crohn’s Disease and ulcerative colitis, and to improving the quality of life of children and adults affected by these diseases. The CCFA serves more than 600,000 patients annually through 40 chapters nationwide. Crohn’s disease affects about 3.2 per 1,000 people in Europe and North America and treatment can cost over $18,000 per patient per year. In 2004, the United States spent $1.84 billion treating Crohn’s and ulcerative colitis.

About Mint Julep Tours – Mint Julep Tours is a recognized leader in Bourbon and Kentucky adventures as well as the only dedicated tour company focused on The Kentucky Bourbon Trail®. Based in Louisville, Kentucky, they offer Custom and Public Bourbon Distillery Tours as well as unique Exclusive Experiences, Horse Farm Tours, Culinary Tours, and Louisville City Tours.