Oh Snap! I’m Out of Bourbon… 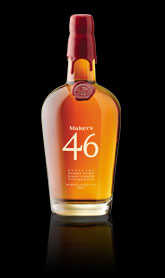 With winter starting to loosen its grip on the Philadelphia region, we found ourselves around LimpD’s patio fire a few weeks ago. It was a beautiful beginning to the outside drinking season. In preparation for the festivities, I took inventory of the cabinet and discovered that I was completely out of bourbon. I’m not really sure how that could be possible, but no matter how hard I searched, there wasn’t a drop to be found. I hopped in the car and made my way to my favorite local liquor store.

As I browsed the aisles, I was ready to grab my goto spirit, Wild Turkey Rare Breed. As I reached for a bottle, I noticed a bottle of Maker’s 46. My curiosity was peaked so I picked some up. When the inevitable text arrived announcing the arrival of fire at LimpD’s, I grabbed the “46” and was off.

As the gang gathered, there was the usual wide assortment of whisk(e)y’s for the choosing. The “46” was well received and I realized that it would warrant its own review.

The folks at Maker’s Mark describe the 46 as their “2nd big idea.” They also note that it is their first new product in more than 50 years! To arrive at the 46 product, they start with fully matured Maker’s Mark, remove the top hoops from the barrel and remove the barrel head. Next, 10 wooden seared staves are affixed to the inside of the barrel. According to the distiller, searing the staves caramelizes the sugars in the wood and thus releasing extra flavors into the whisky. The fully matured Maker’s Mark is then returned to the barrel and allowed to age for a few more months. When the flavor is just right, the Maker’s 46 is removed, bottled, corked, and dipped. 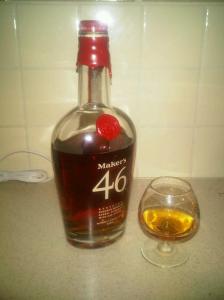 Appearance: Upon pouring into the glass, Maker’s 46 has a deep amber color.

Aroma: The aroma is sweet and pleasing. It reveals hints of vanilla, oak, caramel, and spices.

Taste and Finish: The initial taste hits right up front, remains right at the tip of the tongue, and is unusually long for 94 proof. The second sip reveals a complex mixture of spice, vanilla, and caramel flavors.

Overall, this is an enjoyable whisky that any fan of Maker’s Mark will want to have in their cabinet. Depending on how you like your drink, you may want to add a few drops of water and let the pour open up before sipping. However you like it, I recommend taking the first sip neat.

The packaging retains all the flair of the original Maker’s Mark. The bottle is tall and pleasing and is topped with the distinctive hand dipped look of Maker’s Mark. The standard was seal with the star, ‘S’, and ‘IV’ are present making this a fine gift for any bourbon fan.

My only complaint is with the synthetic cork. To me, premium whisky’s such as this should be topped with natural cork. Otherwise, this is one fine whisky that deserves to be tried.