A while ago, my beer fridge went kaput. As I have been trying to find someone within my area to repair the box, I was forced to drink some of the stock (I know, poor you!) and move some of the stock into the actual “family” refrigerator. Let’s […]

While out looking for a Halloween costume for the boy, I found myself in the same shopping center as Total Wine. So, I thought that I while I was getting something for him, I might as well get something for me. As a part of a mixed six, I […]

As a part of a mixed six, I picked up a bottle of New Holland’s The Poet. I had had their Full Circle Kölsch and the Mad Hatter India Pale Ale so I was familiar with the brewer and I really enjoy an oatmeal stout. New Holland is […]

Having already had, and thoroughly enjoying a Founders Red’s Rye PA, I was looking for another beer out of the Founders lineup, and selected their Dirty Bastard. I chose this beer partly for the packaging (I am far too susceptible to advertising), and partly for the style (I […]

On the way back from Pappy’s house, I stopped by a beer distributor (oh, the joy of PA liquor laws) that specializes in sampler packs and picked up an Arcadia Ales sampler. In the pack was a little something for each of us, as the case contained the […]

On a recent trip to the local store, I hit the “craft” beer wall and picked up a bottle of the Founders Red’s Rye PA as a part of a mixed six. From the Founders site: “Serious hop bitterness, along with an unyielding grapefruit bouquet from the Amarillo dry-hop, […] 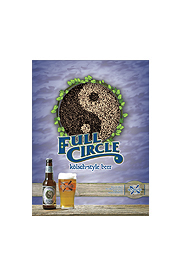 I was looking for something new to share with my fellow dancers and as the Wookie goes on and on about Kölsch style beer, I thought I would give this product from New Holland a try. From the New Holland site: “Full Circle is a deceptively simple beer. […]