In mid January, I purchased a Compass Box sampler set that contained five of their core expressions. I have so far reviewed the Asyla (loved it!), the Oak Cross (the jury is still out), and The Peat Monster (fan-freakin-tastic!).

This time around, I will be reviewing Spice Tree. Compass Box first launched Spice Tree in 2005, but after complaints from the Scotch Whisky Association (SWA) about their use of French oak staves during the maturation process, they decided to halt production. I could rehash the whole story, but since Compass Box has been kind enough to tell the entire tale on their website, I will instead give you the link to read all about it (click here for the whole story).

After a bit of tinkering with the maturation process (no complaints from the SWA the second time around), Compass Box relaunched their Spice Tree in 2009. Here is what our friends at Compass Box have to say about their reformulated Spice Tree expression:

The Spice Tree is made from 100% malt whisky sourced from northern Highland distilleries, (notably and primarily malt whisky distilled in the village of Brora). The primary maturation is in a mix of first-fill and refill American oak.

What is different is the secondary maturation. Rather than using inner stave inserts, as we did for the original Spice Tree, we rack the whisky into barrels with heavily toasted new French oak heads. We have created a method for getting a super heavy toast on the cask heads which imparts a flavour profile similar to the flat staves used for the original Spice Tree. We use oak with three different levels of toasting on the barrel heads, thus allowing us to blend the resultant whiskies to create additional layers of complexity. This secondary maturation lasts as long as two years.

They obviously put a great deal of thought and effort into the creation of this whisky. Let’s find out if it was time well spent… 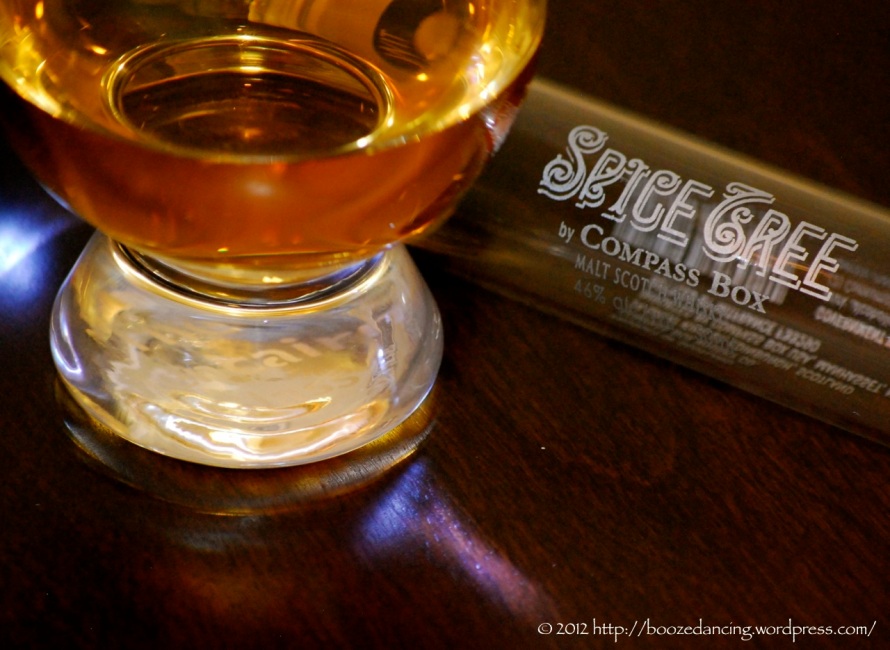 Of the four Compass Whiskies that I have tried so far, I would put the Spice Tree expression on par with its polar opposite, The Peat Monster (the Asyla is a close second, and the Oak Cross is a distant third). The Spice Tree is a delicious and flavorful whisky. I am particularly impressed with its smoothness and sweet/spicy balance of flavors. For those of you that have been apprehensive about Scotch whiskies, I would definitely recommend that you give this a try. Well done Compass Box!