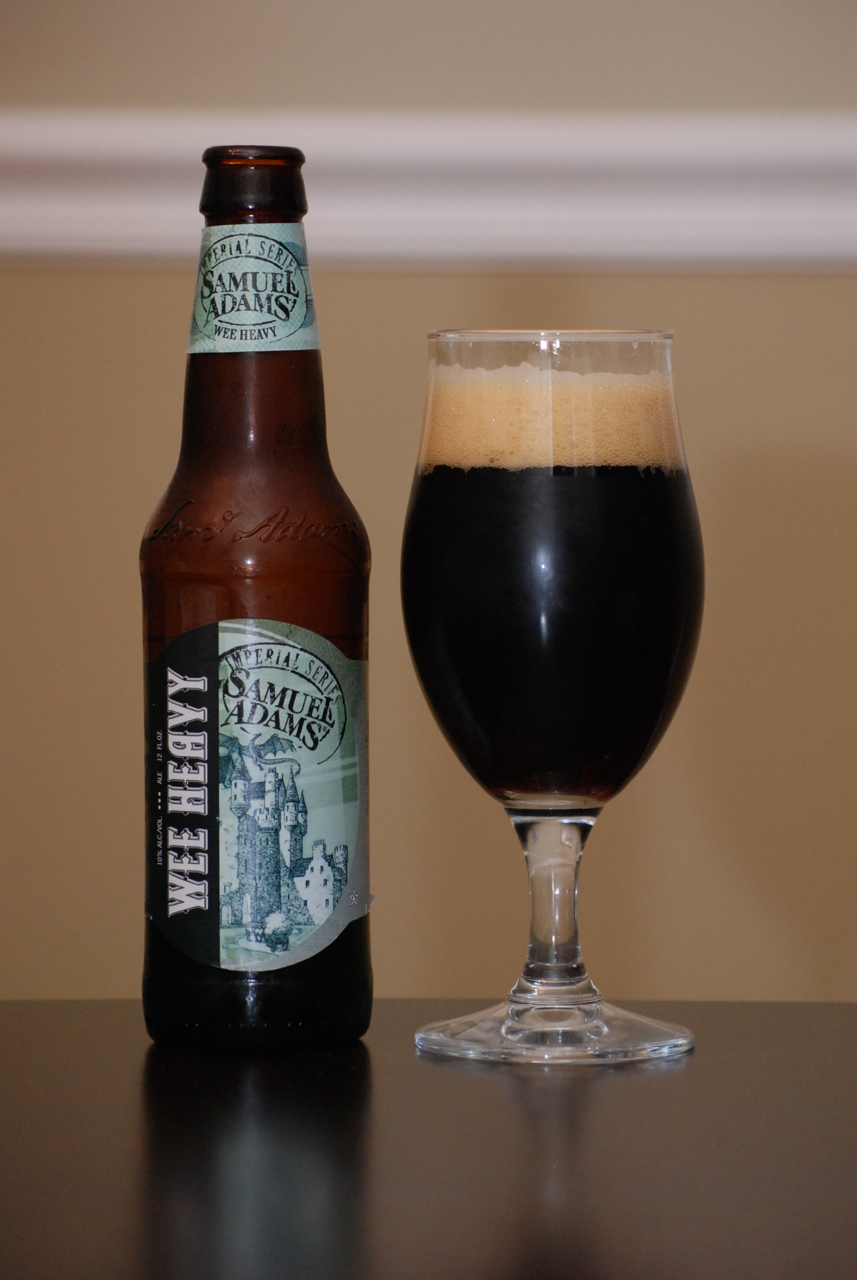 Two things before I get into the review of this beer…

I’ve had a huge variety of beers over the past couple years, but I’m not really sure if I’ve had any Scotch Ales (aka Wee Heavy), so this might be my first one. Here’s what the Samuel Adams website has to say about this beer:

“Samuel Adams Wee Heavy was inspired by both traditional Scotch ales and Scotch whiskies, for a combination of deep roasted flavor and earthy smoke character. Traditional Scottish ales vary in intensity with the strong ales known as Scotch Ale or “Wee Heavy”. To create our own version of the style we added peat smoked malt to bring the unique flavor of Scotland to this complex and satisfying brew. “

Regarding the ABV, Kim was right on the money, i.e. this is a deceptively smooth beer. I would have never guessed that it had such a high alcohol content. This tells me that Samuel Adams has taken great care in creating this beer, and that they have allowed the alcohol to become fully incorporated, so that you don’t get that “Whoa! That’s a really strong beer!” reaction (this has happened to me with a few Imperial beers that I’ve sampled).  While I wasn’t overwhelmed by the smokiness of this beer, I can definitely taste it. Overall, I really enjoyed the Samuel Adams Wee Heavy, and am looking forward to trying some other Scotch Ales/Wee Heavies to see how they compare. I happen to have a bottle of the Stone/Green Flash/Pizza Port Carlsbad Highway 78 in the fridge, so this comparison will probably happen sooner, rather than later.

Cool temps demand warming brews, and at 9.4% ABV, this Chocolate Hazelnut Imperial #Stout certainly qualifies as that. Click play to hear our many thoughts on this #beer that found its way to the #MurderTable thanks to the elusive @alemonger.
How’s this for a teaser of things to come on BoozeDancing Media?!?
For round 2 of our @bimberdistillery reviews, we’re discussing a whisky that was finished in ex-Vino de Naranja casks. Click play to hear all our thoughts!
On today’s #video, we’re sampling four different #nitro #coldbrew #canned #coffee expressions from @firedeptcoffee. Click play to hear our many many thoughts!
He’s no Fast Eddie Felson. But he had fun. And that’s all that matters. #ItsJustAGame
My #BetterHalf was kind enough to share a couple of @highnoonsunsips libations with us, so we just had to review them. Click play to hear all our thoughts.