While away in LA for Jersey Week, my better half, the urchins and I ventured over to Universal Studios. After conquering the park, the urchins were their ravenous selves and in need of feeding. After reviewing a few menus, we chose the Karl Strauss Brewing Company on the Universal CityWalk. […] 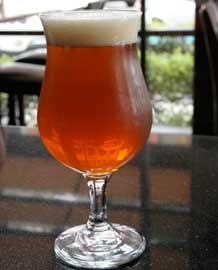 On a trip to San Diego, we stopped at one of the six Karl Strauss Brewing Company restaurants and I opted for the sampler. The first selection was the Woodie Gold. The second was the Wind and Sea Wheat Hefeweizen. The third selection was the KS Amber Lager. […]

The fine folks at @blackbuttondistilling have launched their #readytodrink riff on the classic Bee’s Knees #cocktail via their @canbeecocktails brand and we got to review it!
We’re headed to #Panama for a review of @selvareyrum Owner’s Reserve #Rum. And when they say owner, they mean the fantabulous @brunomars !
Robert Cassell and his @new_liberty_distillery have launched a new line of #RTD #cocktails called @americanliquorcompany Canned Cocktails. We reviewed them!
Great to be back at @pjspourhouse for a @mainebeerco Woods & Waters! Oh and the food was pretty good too!
We sure drank mucho #gin and #rum during episode 15 of the #WhatWeWatchWhenWeDrink #podcast!
Looking for something that would be killer with BBQ or a deli sandwich on some seeded rye? If so, #BlindPickle might be the #HardSeltzer for you. To hear all our thoughts about this intriguing beverage from @deepellumbrewing, click the IGTV tab on or Instagram profile or click the link at the top of our profile to visit our YouTube Channel. Cheers!