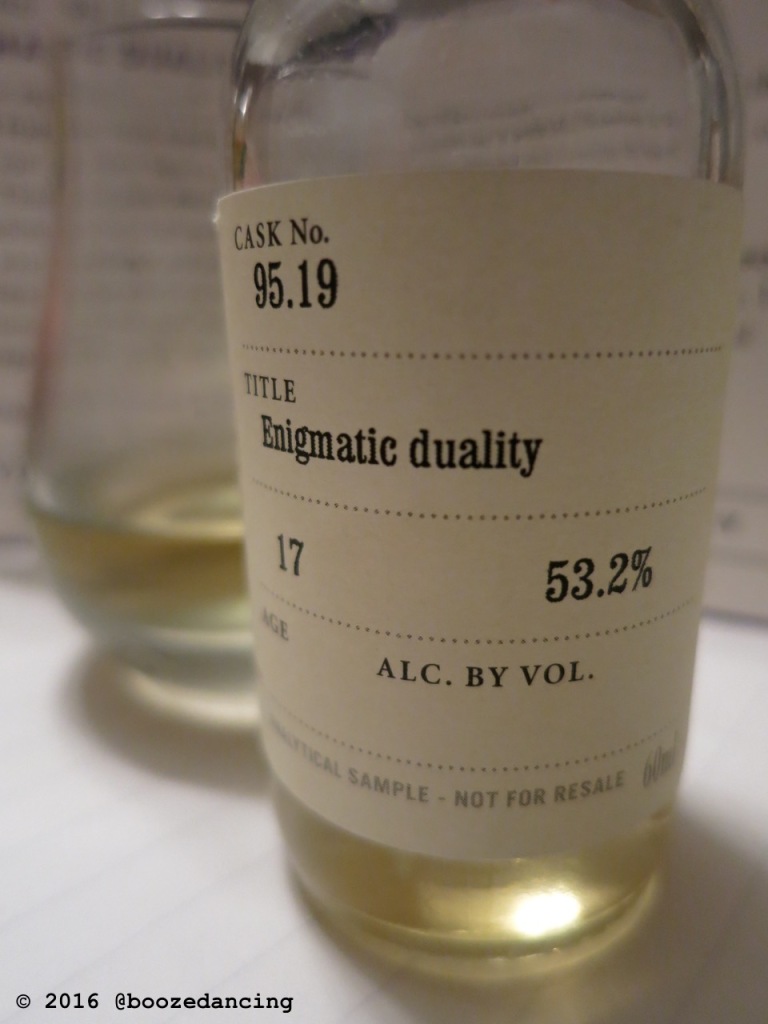 Once again, The Benevolents (The Khmer Rouge (aka Mrs. G-LO) and Benita (aka My Better Half)) had an evening out. They said it was some sort of a fundraiser, but it sure sounded like an excuse to get all of the ladies together to go boozing. In any event, G-LO and I found ourselves once again in charge of the urchins.

I may have mentioned in a previous post or two that we aren’t exactly hands-on in our approach to parenting. We see the importance of the village playing its part in raising the children. Or, at the very least, the children banding together and raising themselves (think a suburban version of Lord of the Flies). So, while the snow was falling and the boys were off watching some Marvel offering, G-LO and I sampled Cask No. 95.19 from the Scotch Malt Whisky Society.

I’m always a little reluctant to include the “what they say” portion of the review as the typical SMWS review is like a crazy stream of consciousness delivery from a 50’s beat poet (bongos not included). That said, here’s what the SMWS has to say about their Enigmatic Duality:

The nose appealed to us all – but in surprisingly different ways – some got tropical fruits – dried mango, kiwi, lingonberry sorbet and ‘waxed lemons in the Tuscan sun’ – others detected deeper elements of tar, seaweed and even a wisp of smoke. That enigmatic duality persisted with water – pink peppercorns, horseradish, honey, ‘lightening over herb gardens’ and toasted pistachios. The palate was immediate and powerful – mouth-coating waxed fruits, heather honey and crème brûlée wrestled with peppery heat, hints of bonfire ash and carbolic. In reduction, we found aloe vera, menthol, Fisherman’s Friends, clove, hickory and fried sage leaves – good sweet-savoury balance.

Now that we know a bit about Auchroisk and the Enigmatic Duality, let’s get on with the review…

Many thanks to Gabby Shayne of the Scotch Malt Whisky Society of America for providing us with this sample!