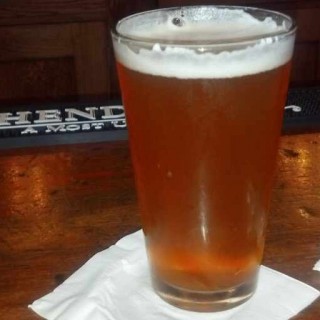 I had to go to Jackson Hole for work and while there I had the chance to sample some of the local brews from the Snake River Brewing Company. The brewery was established in 1994. And, when the founders retired in 2007, the brewery was sold to Ted and Noa Staryk thus continuing its history of family ownership. Snake River makes about 50 different beers and has received a lot of recognition in its role as a small brewer. All I can say is for an out-of-towner; I was pleasantly surprised by the variety and quality of the beers that I had the opportunity to sample. One of those beers was the Zonker Stout. Another was Pako’s Eye-P-A.

From the Snake River site:

Named for Pako (say “PACO”) the dog (No wait, Pako’s not a dog!) This full flavored, fully hop-evident IPA will have the hopheads rejoicing. 6.8% ABV and 60+ IBUs with explosive hop aroma from a pungent Simcoe/Columbus blend.

I found the Pako’s Eye-P-A to have the following characteristics.

The finish may have been a little too bitter for some tastes but I thought that this was a better than average IPA. Once again, I have to commend Snake River Brewing for a job well done.