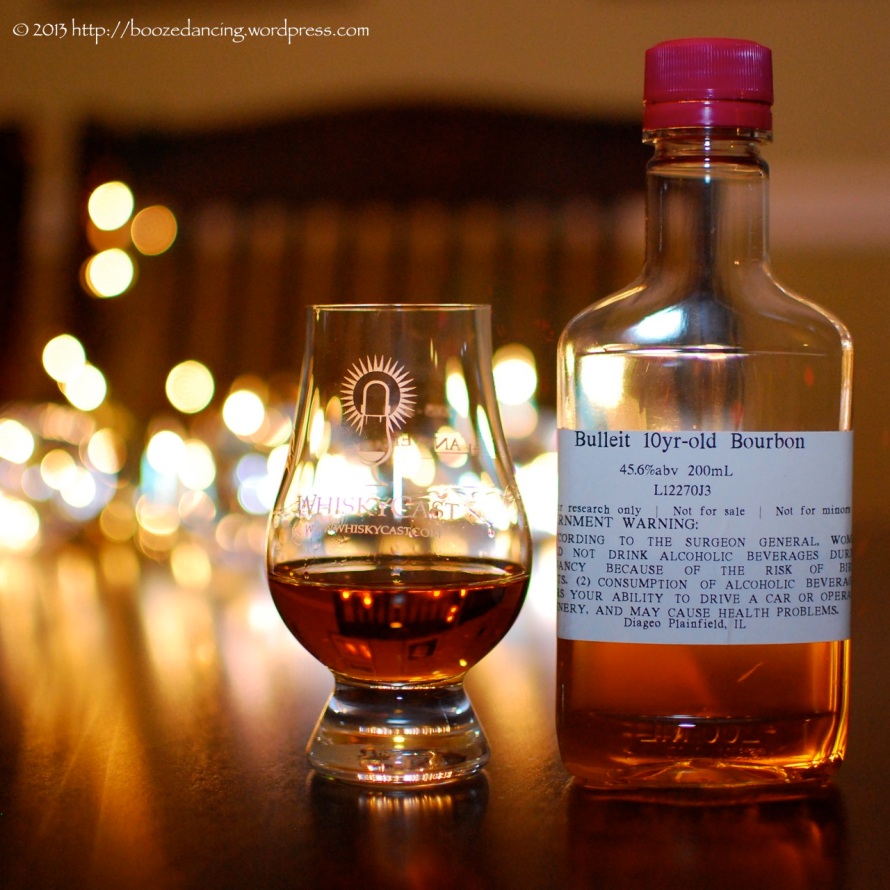 It’s not often that we get to try a whiskey within just a few months of its release, so whenever the opportunity arises to get our hands on a sample, we jump on it! The beauty of trying a newly released whiskey is that there are very few reviews on the interwebz (I read many reviews on a regular basis), and we can therefore approach it with little or no preconceived notions as to the quality of the product.

One of these rare tasting opportunities came up at the beginning of this calendar year, when Bulleit Bourbon launched their latest expression, the Bulleit 10. Here is what Bulleit Bourbon had to say about their 10 year old expression in a recent press release:

Aged in charred American white oak, a select number of Bulleit® Bourbon barrels were set aside to age for ten years to see how the already award-winning bourbon would develop. Bulleit distillers were thrilled to find that the additional years resulted in a special expression of Bulleit® Bourbon that provides a rich, deep, incredibly smooth sipping experience that maintains the inherent character and high rye content for which the Bulleit brand is best known.

And now for our impressions of this new Bulleit expression…

This was a very nice bourbon. It takes some of the rough edges off of the standard Bulleit but still has enough flavor to keep it interesting. I also liked that the ABV wasn’t reduced with the aging. There is nothing worse than picking up a “refined” product only to find that the refinement had more to do with watering it down than with the aging  process.

It’s the whole “managing my expectations” thing all over again. This time around, I wasn’t expecting very much from the Bulleit 10 after reading a Facebook comment from a very prominent whiskey writer stating that it wasn’t worth the extra dollars when compared to the standard issue Bulleit (he liked the product, but didn’t love it). To be completely honest, it’s been awhile since I’ve spent any quality time with the standard issue, so I won’t be able to make a value judgement on the Bulleit 10, i.e. I can’t really say if it’s worth the extra $15 to $25 that you would have to pay over the cost of the standard Bulleit. That being said, I really enjoyed the Bulleit 10. This is a very smooth, easy drinking whisky, but unlike some other Ryes and Bourbons that we have sampled recently (Angel’s Envy is a prime example of a whisky that was good, but not particularly exciting to me), it had just enough punch to keep me engaged. The fact that it didn’t take me very long to finish my 200ml sample speaks volumes. The Bulleit 10 is well worth trying.

Many thanks to Christina Kavanaugh of Taylor Strategy for sending us these very generous samples!

It’s bubbly time on #BoozeDancingTV and we’re celebrating with a review of @korbel_1882 #Prosecco. Click play to hear all of our thoughts!
#SundayDinner
#Bubbly
We’re taking a deep dive into the peatier side of @springbank1828 with a review of their #Longrow #Peated Single Malt Scotch #Whisky. Click play to hear our many thoughts about this mighty delicious dram!
The fine folks at @olesmoky #Moonshine have created a holiday ready libation that they call #ShineNog. To find out if this #libation is as tasty as it sounds, click the play button.
It’s been a little over 12 years since we last reviewed this #quartet of @lindemansbeers #Lambic #beer. Fair to middling were our 2010 impressions. To find out if our tastes have evolved at all over the past 12+ years, click play.