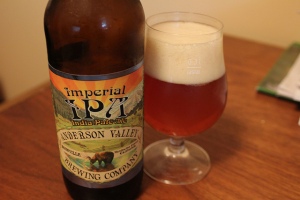 The Anderson Valley Brewing Company in Boonville, CA has been in operation since 1987. Presently, they produce 8 beers year round, two solstice brews and the limited edition Bahl Hornin’ series, (that means “good drinking” in Boontling). Last summer, we had reviewed the Summer Solstice. In the Fall, we had reviewed the Boont Amber Ale. Recently, we had the opportunity to try three cans (the Boont Amber Ale, The Hop Ottin’ IPA and the Barney Flats Oatmeal Stout) sent fresh from the brewery. The quality and the freshness of the cans made me revisit the brand and I picked up an Imperial IPA.

Here is what Anderson Valley has to say about their Imperial IPA:

One look at Anderson Valley’s huge redwoods or imposing coastline cliffs, and it’s easy to see where the inspiration came for our Imperial IPA. This is one big beer

The Imperial IPA was first created in honor of our second decade producing some of the finest beers in the world. This over-the-top brew is loaded with excessive amounts of malts to balance 20 separate additions of the finest Pacific Northwest hops to create what the late beer critic William Brand described as “The kind of beer that made California craft beer famous”.

I found the Imperial IPA to have the following characteristics…