Ballast Point Canned Cocktails: Canned Heat or Can of Corn?

During his recent visit to the Best Coast, G-LO and I sat around the kitchen counter commonly known as Krouse Island as I explained to him how all the great things in life start in California where the sun is nice and warm, and the property taxes are really low. Surfing, the Internet, Internet surfing, In-N-Out, taco trucks, monster trucks, monster tacos, and reality TV. The list goes on and on into the California desert and doesn’t stop, not even for gas in Blythe or a gyro at the Mad Greek in Baker, home of the World’s Tallest Thermometer (oral, not rectal). Some of the greatest minds in the Golden State are working non-stop with algorithms, slide rules and focus groups of pimple-faced teenagers developing things we have no idea we need or why we’ll need them. California is the ultimate test market. Ideas start here. Trends starts here. Pollution starts here. And they all move east like a wave of hungry zombies (they started here too) chewing up all in its wake and churning up a flotsam and jetsam of As Seen On TV ideas as if it was at all-you-can-eat buffet. (All-you-can-eat buffets started here too.  We licensed the idea to Las Vegas 60 years ago.)

And California is the leader in all types of nifty alcoholic beverage ideas. Zima? Ours. Bartles & Jaymes? Ours. Goldschlagger Cap’n Crunch? Most definitely ours! So it should come as no surprise that we are rapidly becoming the kings and queens of canned booze. And, no, we’re not talking brewskis, Dude. Canned cocktails! It’s an idea who’s time has come. And who birthed this not-so-crazy idea? Ballast Point, that’s who, those fine craft beer folks from down San Diego way, the fabulous city that brought us Simon & Simon, Stone Temple Pilots, Tawny Kitaen from Bachelor Party (not Tawny Kitaen with the legal baggage), and fish tacos. With a wedge of lime.

Now we know that Ballast Point was recently gobbled up for practically the price of an aircraft carrier in San Diego Bay but that hasn’t stopped them from coming up with all kinds of boozy beverages for your dining and drinking pleasure. Their list of crafty beers and distilled spirits is lengthy. And somewhat recently they added canned cocktails to the line-up. Think about it…

It’s a hot summer day, you’ve spent it ignoring all the chores and the kids. You’re exhausted. You deserve a cocktail. You decide to treat yourself right for a change. But, ugh, the work. Measuring, slicing, running to the store for missing ingredients. But wait! It just got simple! CRACK open a cocktail! All you need is a glass with ice. How hard is it that? You’re not a barbarian, are you? No, you most definitely are not.

Ballast Point has taken the classy and put it in a can, or so they say. G-LO and I needed some classing up so we decided to take a few of these Can’tails and ran them through our rigorous testing methods. We got a couple of clean glasses down and immediately got to work… 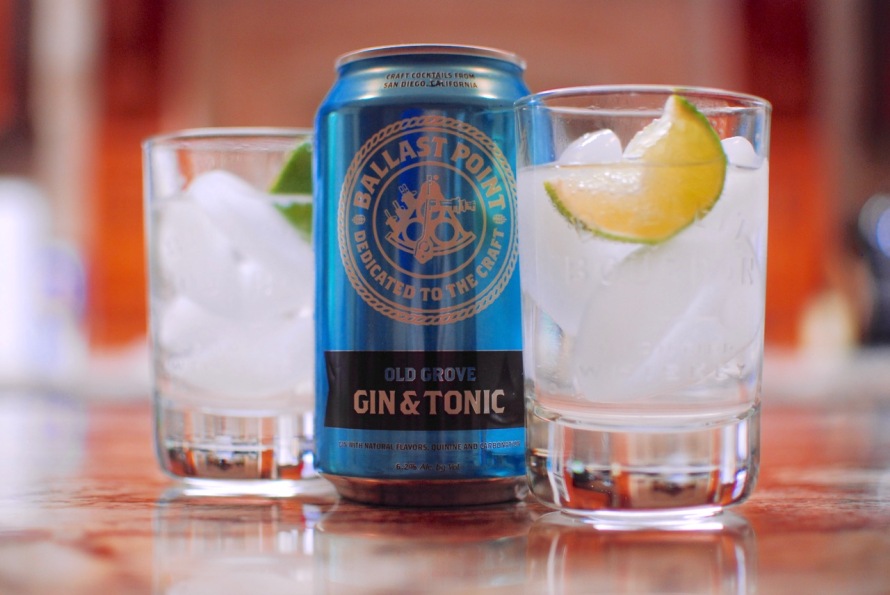 First up, Old Grove Gin & Tonic. Rolling in at 6.2%, we decided to add lime because that’s what you do. We saw it in a book with fonts from the 1920’s so it must be true. The gin and grapefruit cucumber tonic are both made in-house so it’s definitely a Ballast Point cocktail right out the can. The can states (yep, a talking can) that it’s a 6-to-1 ratio of tonic to gin. That doesn’t bode well.

G-LO: The lime overpowers it a bit so I can’t really comment on the nose. Oh, wait. I just did.

AK: Noses run in my family so no jokes! I don’t know how to make a G&T without lime. Sounds complicated. Glad we added it.

G-LO: Very clean and crisp tasting with lots of cucumber coming through. Very drinkable. There’s a bit of tartness in the aftertaste. It’s a tad pucker-y.

AK: I like the cucumber coming through but don’t get much of the grapefruit in the tonic. I wonder how the the Old Grove Gin is on its own?

G-LO: I’ll take this over a Bud Light Lime any day of the week but I doubt I’d take this over something like a Sculpin. Plus, at $16 for a four-pack, I think it’s a bit overpriced for what it is.

AK: I’d take this over beer since…I don’t like beer. It’s light and refreshing but hard to compare to a regular G&T since it’s lacking all of the flavor and notes of a good gin and even an average tonic. Not really a fair contest.

Then we got all experimentally. We broke out a bottle of Mahon Gin and added just a little to “kick it up a notch.” 6-to-1 wasn’t doing it for us. Now we were in real G&T ratio territory, about 3-to-1 using our eyeballometer.

G-LO: Adding Mahon definitely changed it from an adult rated soft drink to a cocktail. The extra gin pumps up the ABV but tones down the cucumber in the tonic. More gin type notes come through. Yummys up the canned version nicely.

AK: Now I’d be really curious to try the Ballast Point gin in a G&T at proper proportions. It would have to make a better cocktail than the canned version, right? The Mahon Gin tricks it out radically.

Next up, Three Sheets Rum & Cola. We weren’t sure how to present this one but we opted for on the rocks. Again, Ballast Point makes the white rum and the pure cane cola. Is there a beverage that they don’t make? The ratio is 5-to-1 on this one and the ABV is 7%.

G-LO: For whatever reason, I thought this should be served over ice with a squeeze of lime because that’s how I’ve always had a rum & Coke. But that really waters down an already watered down cocktail.

AK: It’s pretty weak and kind of flavorless. Not what I’m looking for in a rum and cola. I do like that it’s cane sugar; I bet it’s pretty good on it’s own. Definitely hard to get a feel for the rum.

G-LO: It’s not bad per se, but it doesn’t really taste like a rum & Coke. It tastes more like flat cola.

Then we decided to try it right from the can at room temperature.  In glasses.  No cooties were exchanged.

G-LO: Whoa! A whole different experience! Bubbly, sweet with a subtle taste of rum coming through. Much better this way.

AK: It definitely gains some flavor by not being diluted with ice. Now it’s more of a tasty cola but the rum is still fairly weak to me.

G-LO: Again, $4 for a can, I doubt that I’d ever actually buy it given the cost of light rum and well crafted cola, and what you could do on your own.

AK: Yep, it’s not worth the convenience for an average drink.

Once again, we spiked this one with some booze since it’s science and looking at various outcomes with changing variables is critical to a well-run experiment. Einstein told me that. Big drinker, that guy. We went with a Brugal 1888 Gran Reserva rum because (a) that’s what just happened to be within arm’s reach on Krouse Island, and (b) it would be fun typing out the name.

G-LO: This definitely improves the Three Sheets R & C. An added better-than-average rum kicks up the flavors. More of those floral rum notes that didn’t exist before in the “flat cola” version.

AK: The flat cola goes to the background and it becomes obviously a rum forward drink. Much better of course. There are definitely “ratio” issues with these can-ibles.

Canned cocktails are not the worst idea in the world. Beanie Babies are. Given the price and relative ease in making a 2-3 ingredient cocktail, that canned version better be darn good to justify its cost. Are these really a gin-flavored tonic and a rum-flavored cola masked as cocktails at $4 a can? Sure tasted like it. It wouldn’t seem to be awfully hard to change the ratio even slightly to get a better “cocktail” out of it. There are probably issues about added ABV and taxes, and maybe issues with keeping the carbonation up with more booze for all that we know, but as they are now, they are wimpy drinks that are hard to justify as solid cocktails. And if you need to add gin/rum to them, then the convenience factor goes out the window.  We’d recommend seeking out the Ballast Point gin and rum.  Then make your own cocktails.  You’re not lazy, are you? No, you most definitely are not.