G-LO: This past September, I once again paid a visit to The West Coast Office (aka AK or The WCO), and much like last time, my visit would be a short one, i.e. I arrived at 1PM on a Friday and was headed home by 10PM on a Sunday (AK provided the shuttle service to and from LAX, though the “to” bit was more of a “drop and roll” than an actual drop off. That’s how they do it on the West Coast). Oodles of food and drink were on the agenda, and we also had a whisky event to attend: LA Scotch Club’s Peatin’ Meetin’ VIII.

AK: And whenever you go on vacation, you take pictures then invite friends over when you get home and bore them to an untimely death with said pictures.  Think of this as a slide show at G-LO’s house with coffee cake and whisky.  Don’t make yourself too comfy though. He’s gotta take the boys to soccer early in the morning. Look at the pictures, don’t comment, and don’t touch anything. Leave without incident, and he might invite you back to see pictures of the G-LOs in Trenton over Spring Break. He asked me to help narrate since I was there and have a semi-serviceable memory. Buckle up, Kids! It’s gonna be a boozy ride…

AK: The Grand Canyon! No, wait. Not The Grand Canyon. I believe this is the Great Table of Peated Whisky.  It seemed to go on for miles.  I never thought I’d see it in person.  Pictures really don’t do it justice.

G-LO: THIS is the pot of liquid gold that you’ll find at the end of the rainbow!

AK: The LA Scotch Club (LASC) members-only area. Various tables with lots of fun whiskies I’ve not seen before.  Very exclusive.  Not sure how you got this shot, Lee Harvey.  Tele-photo lens from the window of the book depository across the street?

G-LO: They let me in for the members-only VIP hour, but they wouldn’t let me drink the members-only VIP whisky. I told the LASC folks that I know a guy, but when I said that the guy was you, well, that’s the story for another post. Oh well. You drank and kibitzed, I did my best Weegee impersonation. Ok ok. Back to the photo commentary. All I can say is that the look on SCN member #1044’s face says, “LASC membership has its privileges my ass! How did I get stuck pouring whisky? I came to drink, damn it!”

AK: The Glencairn Empty Box exhibit.  My parents told me about this when I was a kid.  It’s quite a sight to see. Hard not to shed a tear or two gazing upon it.

G-LO: Though no Glencairn glasses were harmed in the taking of that photo, I’m sad to report that they didn’t have any of the other kind of peanuts on hand to go with all that whisky. Then again, they did have plenty of that Laphroaig soaked Bundt cake which was much much better than any peanuts that I’ve ever had. I had two pieces of that Peat soaked cake. That’s what they get for not letting me have any members-only whisky!

AK: Dad!  He really needs a haircut.  I’ll take him on Saturday.  How does he still have all of his hair?

G-LO: A haircut is just the tip of the iceberg as far as grooming goes for dear old dad. Would it have killed him to take a shower? Oh wait. Scottish water is reserved for whisky making, not bathing. Carry on.

G-LO: Is that what was making all of the growling noise at the Great Table of Peated Whisky? And all this time I thought it was my stomach growling due to the lack of peanuts.

AK: Here’s the guy whose dad makes the private label whisky for Trader Joe’s. They also make the shredded Brussels sprouts in a bag for them too. Great for salads!  Sooo easy!

G-LO: Aye! A few drops of this magical “Trader Joe’s Only” elixir will make your muscles bulge to twice their size. There won’t be a shirt or kilt on the planet that can contain your new found massiveness!

AK: The paparazzi were out in force.  It’s LA, Baby! Kim’s butt, OJ, Leo, Carrot Top.  They were all there!

G-LO: Don’t kid yourself. That guy with the Canon was part of the security detail. Don’t be surprised when you see our photos on the LASC “Most Wanted” page of their website.

AK: It was a beautiful and magical night to pick up loads of free stickers, pens and buttons.  Ahh, the memories.

G-LO: Though not a good night for single guys trying to pick up The Ladies. All I heard from her was, “Joe? JOE! Get that deer in the headlights look off your face. My eyes are up HERE!”  He tried to go all Larry David on her with the old “If you wanted me to look at your eyes, you wouldn’t have worn that blouse” line, but she didn’t go for it. At least no one got busted upside the head with an empty bottle.

G-LO: “Ha Ha Ha! Like any of these rubes know the difference between Scottish Barley and Islay Barley. Let’s serve it to them blind. Then we’ll see how smart they are” is what she seemed to say. 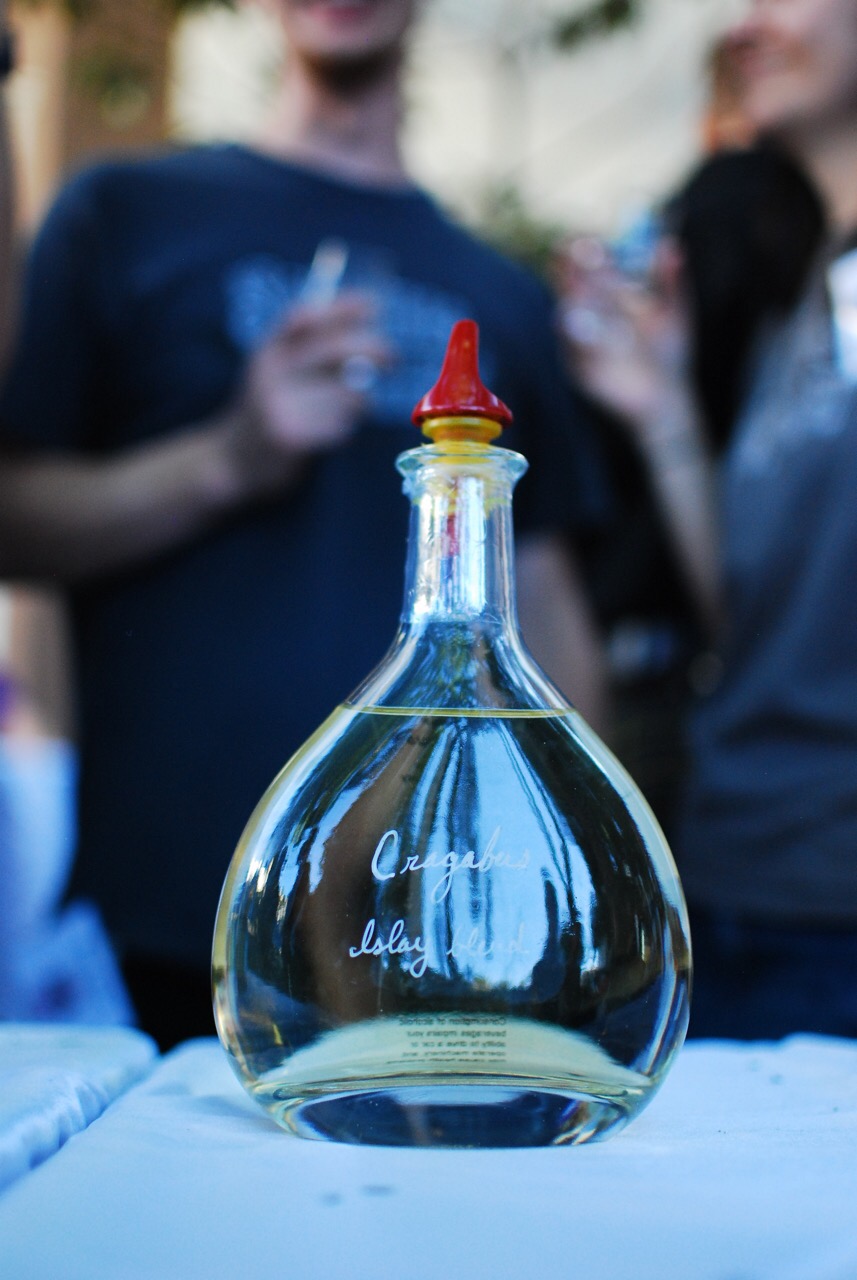 AK: Probably the best olive oil I’ve had in years.  EVP. Extra Virgin Peated is the best of the best.

G-LO: Who swapped out the whisky for a bottle of Mateus Rosé???

G-LO: A sunglasses / whisky pairing lesson from The Master!

AK: This picture is deceptive.  That Ardbeg monument is 775′ tall.  If you look really close you can see G-LO waving from the observation deck above the chain neck.  Or it might be a fly.  I was in the train station buying a ticket to Rancho Cucamonga.

G-LO: Much like King Kong, it’ll take more than a couple of chains to tame this smoky beast of an Islay whisky!

G-LO: You mean it’s not? The look on his face says, “If I keep holding the bottle like this, maybe they won’t notice that I’m all out of whisky.”

AK: The pros behind the booths are all smiles until someone challenges them to arm wrestling. Joe is 62-0. Stop asking him!

G-LO: Huh. I had no idea! Guess all that bottle lifting and pouring has its benefits.

AK: The Godfather of Fast-Aging Spirits Science, Bryan Davis. He’ll make you a whisky in six days that you can’t refuse.

G-LO: “Cigarette? What cigarette? I don’t have any cigarettes.”

AK: Holographic bartenders appear to be the future in the fuzzy cocktail business.

G-LO: Thankfully, the actual cocktail was real and not a holograph of a cocktail. That would have been disappointing.

AK: The North Patio at Union Station was the venue in Downtown Los Angeles.  Many people came and sat down on rented white folding chairs around rented round tables.  The lights were pretty and used electricity to work.

G-LO: I sat down reluctantly. After the brouhaha at the VIP section I wasn’t taking any chances. I’m not bitter. Just cautious. Ok, so maybe I’m a little bitter. Like a Fernet on the rocks with a splash of Club Soda. 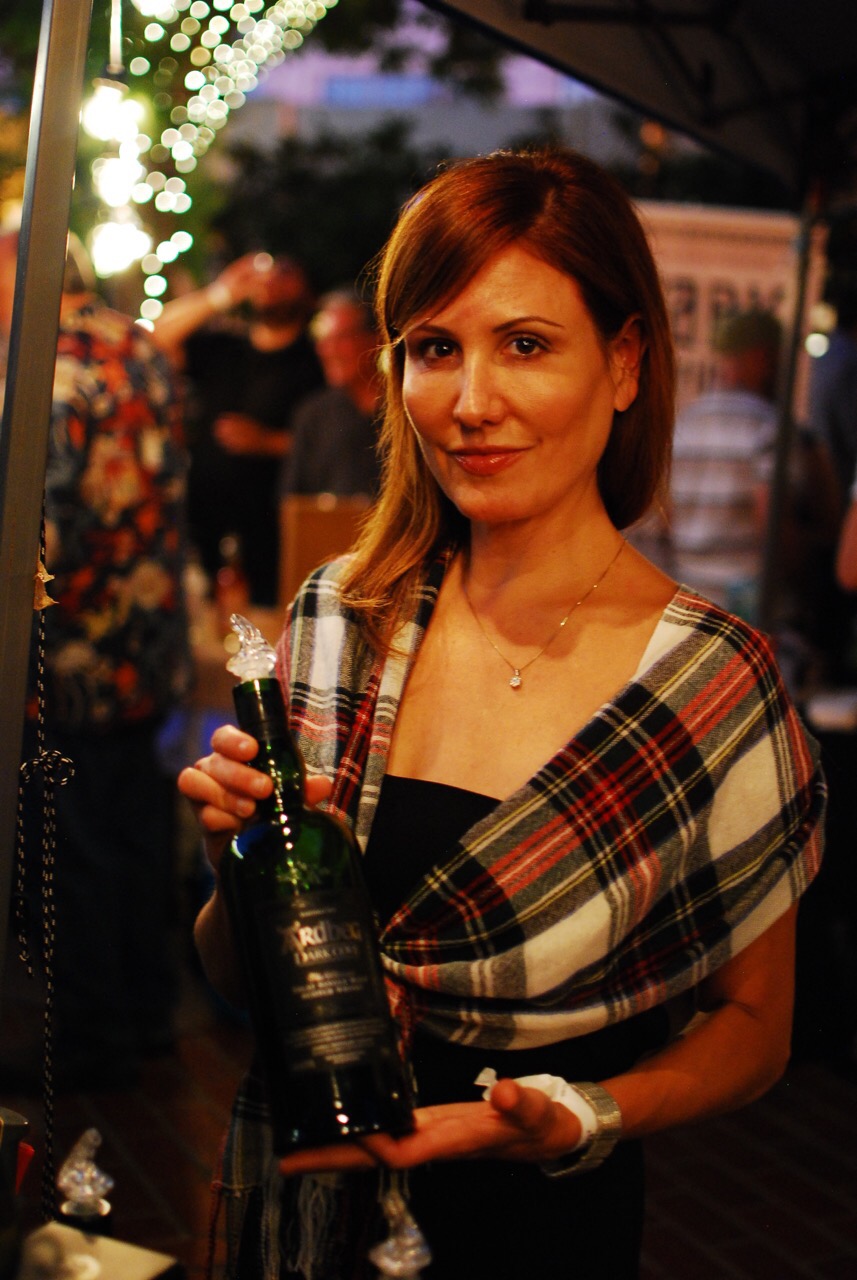 AK: Another great edifice in Ardbeg Monument Valley. Lady Ardbeg stands 457′ tall and was given to us by the Scots in 1962 after we gave them Indiana. The annual “changing of the bottle” on Ardbeg Day brings folks from as far as the San Fernando Valley to see the spectacle. The kids love the fireworks. How can they not? That bandage on Lady Ardbeg’s wrist is from a construction mishap while trying to reset her Apple Watch. Should have gotten AppleCare, darn it.

AK: It’s Bozzy and NOT the Scotch Trooper!