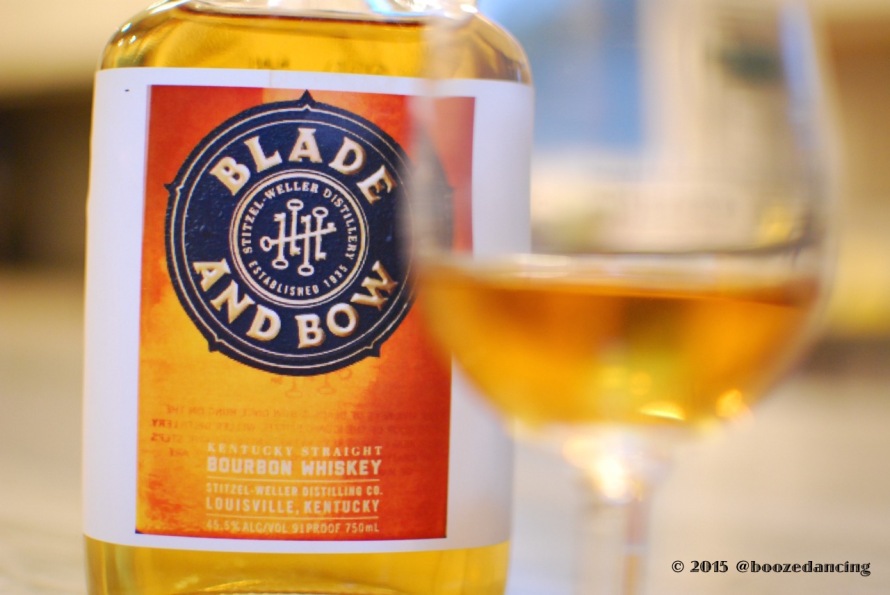 The other night, G-LO called to tell me that our workload had backed up (his polite way of saying that I had once again shirked my Booze Dancing responsibilities) and that we had mucho whiskey to review (talk about #FirstWorldProblems!), so he invited me over for another episode of Whiskey Night at the Murder Table. During this episode, we sampled two whiskies and a pineapple rum. G-LO took the IW Harper and the Plantation Pineapple Rum Stiggins’ Fancy to write up and left me with the Blade and Bow…

Produced by Diageo, Blade and Bow is a nod to the legendary Stitzel-Weller Distillery that was founded in Louisville in 1935. Stitzel-Weller prided itself on quality up until distilling stopped in 1992. The whiskey itself takes its name from the two parts of a skeleton key: the blade shaft and the ornate bow.

In an inspired bit of packaging (as you already know, I’m a sucker for pretty packaging), each bottle of Blade and Bow comes with one of the five different keys (a bit like the different toppers on the Blanton’s bottles). At some point, the collection of all five keys will allow the holder to enjoy an interactive experience should they venture to the Stitzel-Weller site.

A homage to the legendary Stitzel-Weller distillery, Blade and Bow Kentucky Straight Bourbon Whiskey uses a unique Solera System aging process to preserve some of the distillery’s oldest whiskey stocks, including some of the last bourbon produced there before it closed in 1992.

The solera liquid is mingled with other fine whiskies aged and bottled at Stitzel-Weller. Aged in new charred American white oak barrels, this bourbon has a subtle aroma of fresh fruit and a taste that includes hints of dried apricot, ripe pear and a sweet roasted grain. The finish has notes of charred oak and warm winter spices.

Let’s get on with our review…

Many thanks to Taylor Strategy for providing us with this sample!

We sampled this spirit made from Rosen Rye heritage grain when it was coming right off the still back in September 2019 and now we get to try it after two years spent in the barrel. Click the play button to find out what we thought of @stollandwolfewhiskey Straight Keystone #RosenRye #Whiskey.
The fine folks at @dogfishhead do what they do best and get a little WILD with their latest #IPA release. Where The Wild Hops Are is its name and we crack it open for a taste at the #MurderTable. Click play to hear all about it.
It’s #BurnsNight! Cheers to all of you!
Mud #Wrestling!
We're breaking out our Medieval Armor Leisure Suits and doing the Side Hustle for a #MurderTable tasting of Perrin Brewing’s #Disco Knights New England Imperial #IPA.
We love #cocktails!