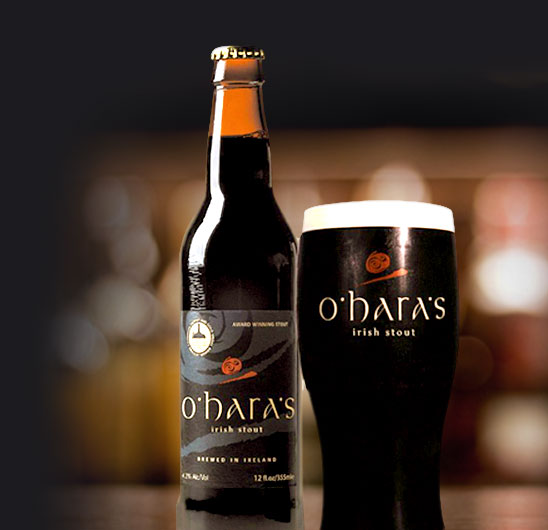 As a run-up to International Stout Day, I had the great pleasure of finding myself at Fitzgerald’s in Doolin, Ireland.  Prior to our trip, my father-in-law had mentioned our travels to his softball/racquetball buddies and one of them had told him that O’Hara’s is the best stout in Ireland. Always one to keep the peace, I decided that rather than opt for the more traditional (and readily available in the US) Guinness, I would listen to my father-in-law and proceeded to get us both a pint of O’Hara’s Irish Stout.  O’Hara’s Gold Medal Winning Stout is produced by Carlow Brewing Company, an Irish craft brewer founded by Seamus O’Hara in 1996. After some early struggles, the brewer has found great success and now produces a line-up of six beers as well as several seasonals.

Think of Irish beers and you think of Stout! Drink an O’Hara’s and you are drinking a “True Irish Stout”! Carrying the family name of the brewery founders, this multi-award winning traditional dry Irish stout, deep black colour with a reddish hue when held to the light, pours with a thick creamy head that is almost tan in colour. The Irish Times wrote of O’Hara’s, “…anyone with a stout memory will find that the crispness and lucidity of O’Hara’s evokes the pleasures of nostalgia almost as much as the pleasure of drinking. This award-winning full-bodied and luxuriously smooth dry Irish Stout brings one back to how Irish stouts used to taste”.

I found this beer to be…

I hate to admit it but by father-in-law actually had a good idea and I am glad that I got a chance to sample the O’Hara’s. This was a very nice stout. I still think I might like Guinness better but that is probably more a result of my dislike for coffee than it is a real preference for one beer over another.