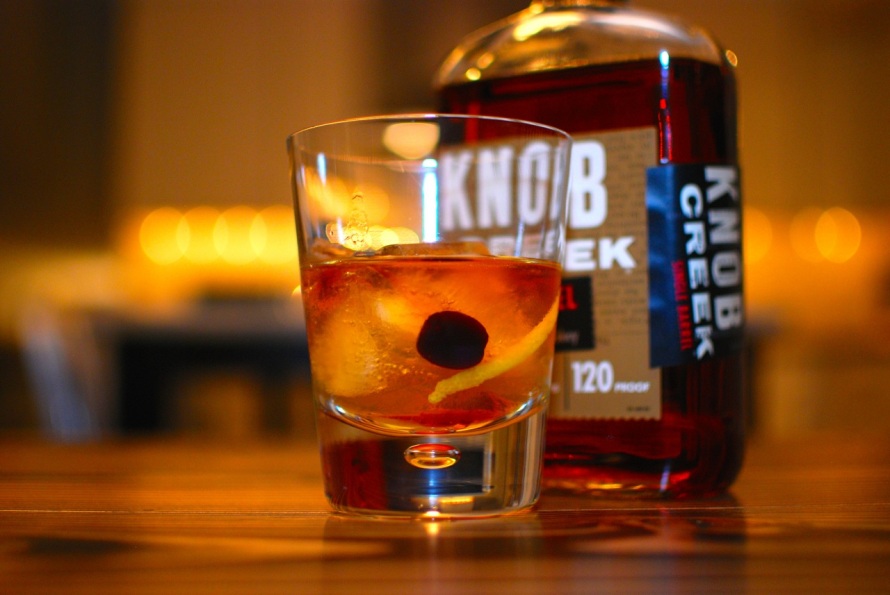 My boy G-LO is a big fan of the cocktail, and on those rare occasions when he’s motivated enough to don his bartender’s cap, he’ll expend a great deal of effort to throw together a respectable and representable version of whatever cocktail he’s been inspired to make. I admire both his ingenuity and his apparent grasp of the “on hand” requirements. While you typically can’t find a box of crackers in his pantry, if it’s cocktail-making sundries that you seek, he is bound to have lemons and oranges (to juice, peel, zest, or muddle), a crock of really good Italian cherries, simple syrup, 12 kinds of bitters, and several kinds of Vermouth on hand. Now if it’s charcuterie, fromage, and any other snacks that you seek, my home is where you want to be, but if you’re hankering for a cocktail, you’d be lucky to find potable water and fresh ice. And so, while G-LO has spoiled me with his occasional cocktail making prowess, I am still able to recognize when a bartender has transformed into a mixologist.

I have on occasion been one to imbibe whilst on a work trip and will usually order a Manhattan, since most bartenders are able to prepare a decent one. Bourbon or Rye whisky, sweet vermouth, bitters, and a preserved cherry served ice cold in a beautiful glass. What’s not to love about that?

While the Manhattan is my go-to drink during these work trips, lately I have become a big fan of the Old Fashioned. I learned to truly appreciate this classic drink during one of my visits to the Lobby Bar of the Brown Hotel in Louisville, KY thanks to the bartending skills of Kurt, my mustachioed mixer, who likes to top his Old Fashioned cocktails with a frothy egg white. My Old Fashioned appreciation was further enhanced during a Knob Creek Bourbon night at G-LO’s when he prepared a batch of Old Fashioneds using his special cherries for one of his famous boozeography sessions. But my latest foray into the Old Fashioned came while combining a business trip to Kansas City with a family trip to Orlando…

During Jersey Week 2015, I spent the early part of the week in Kansas City and the latter part of the week with Benita and The Urchins (aka my wife and kids, not some LA post-punk band) in Orlando. When I arrived in Orlando on Thursday night, I went up to our room at the Loews Royal Pacific Resort in Universal Studios and found that everyone was down for the count. Since it was still early, and since I was wide awake, I decided to pay a visit to the hotel bar. As luck would have it, there was a Thursday Night Football game on and a few seats at the bar, so I decided to settle in for a quiet evening of football and cocktails.

During my Thursday night session at the hotel bar, I had the pleasure of drinking a Maker’s Mark Old Fashioned made by Tuan, my bartender for the evening. As far as Maker’s Mark goes, while it’s not exactly a reach of a Bourbon, it’s just solid enough to prop-up a cocktail and turn it into something special. When Tuan took my order, I noticed a twinkle in his eye and a smile developing on his face as he called for his muddler. I almost expected him to say, “Happy Birthday!” since his look reminded me of Frosty the Snowman after someone put a top hat on his snowy noggin. I was somewhat puzzled at first, but as I looked around the bar, I immediately realized why my drink order made Tuan so happy.

After an evening of pouring Bud Light Limes and Rum and Cokes, a drink order that would finally put Tuan’s bartending skills to work had emerged. Tuan’s Old Fashioned is one of those discussions for the ages, i.e. the chicken or the egg, Ginger or Mary Ann, ice or no ice, muddled fruit or no fruit at all. Tuan chose a a maraschino cherry and an orange for my drink and muddled them to perfection with simple syrup and some orange bitters. Then, after a generous pour of Makers Mark and a quick turn in the shaker, “VOILA!”, a fantastic cocktail was born!

While more of a straight shooter when it comes to my drinks (a frothy glass of beer, a healthy measure of whisky, or a glass of wine will usually wet my whistle), I have learned to appreciate a well-crafted cocktail every now and again. And Tuan’s Old Fashioned, crafted in a family-friendly hotel no less, is well worth checking out. It almost made the Cincinnati vs. Cleveland game worthwhile.