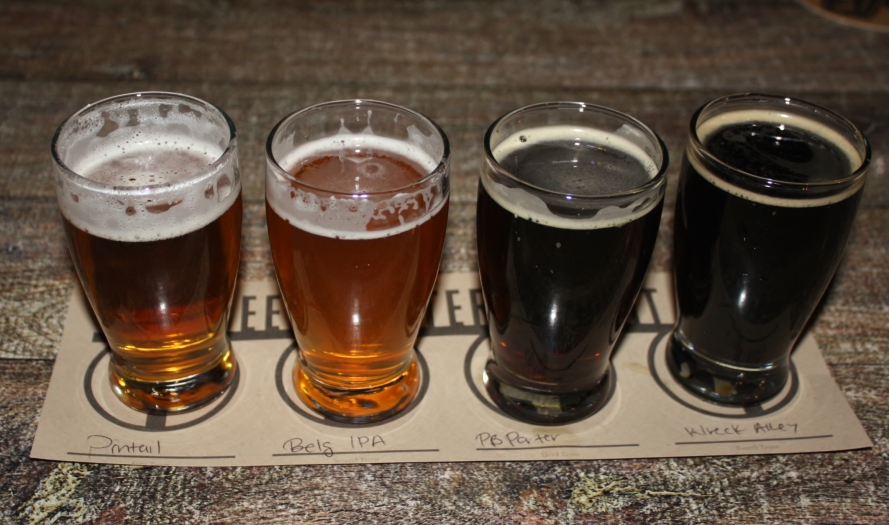 While away in LA for Jersey Week, my better half, the urchins and I ventured over to Universal Studios. After conquering the park, the urchins were their ravenous selves and in need of feeding. After reviewing a few menus, we chose the Karl Strauss Brewing Company on the Universal CityWalk. We had been to the Karl Strauss in San Diego in 2011; so, we were familiar with the fare and more importantly, I knew that I could squeeze in a quick tasting.  The first thing I noticed about the sampler was that it has been cut back from six to four. I suppose that was a good idea as four 4oz samples of varying high test brews is a better idea than six. I also noticed that I could pick any four. In the prior sample, I received four of the “regular” line-up and then two “wild card” picks. For my four samples, I picked the Pintail Pale Ale, the Blackball Belgian IPA, the Peanut Butter Cup Porter (more for my better half than me) and the Wreck Alley Imperial Stout. This is a review of the Pintail Pale Ale. This is an award winning American Pale Ale brewed with Cascade and Chinook hops and then dry-hopped by dumping a couple hundred pounds of Amarillo hops into the tank.

Dynamic citrus and pine flavors from Newport and Cascade hops give the beer direction, while fine pale malts provide balance. The remarkable floral aroma from dry hopping with Amarillo hops makes this beer as enjoyable as cruising down to the beach, board in tow. When you spot a pintail headed towards the beach, odds are the surf is way up. And where this board provides balance on big waves, Pintail Pale Ale brings balance to big hops. We wanted to brew a session beer with huge hop flavors, so we created Pintail – a dry-hopped pale ale from the West Coast.

I found the Pintail Pale Ale to have the following characteristics…

I tasted this one first and found it to be very easy drinking. Had I not had three more to taste, I might have just thrown this one right back and ordered another. While I am more of a fan of porters and stouts, you certainly couldn’t go wrong with the Pintail. It didn’t have the bitterness that I associate with an India Pale Ale but was still quite flavorful as the dry-hopping delivered the desired effect.