How about a bit of Peatbog Faeries music to set the proper mood for this peaty post?

There are many famous Peats. Peat Rose (not in the Hall of Fame). Peat Townshend (wrote Quadropeatia). Peat Seeger (“On Top of Old Peaty”). Peat Rozelle (NPL commissioner). St. Peater. Peater Dinklage (of House Peatnister). Peater Gabriel. Peater Pumpkin Eater. Peaty the Dog. But my favorite, for Peat’s sake, is this guy:

He shows up once a year at a dram-happy Los Angeles event in his honor, The Peatin’ Meetin’, pouring whisky, posing for the 250 strong event, and graciously accepting all of the accolades the smelly guy deserves. Organized by those fine folks at the L.A. Scotch Club, Peatin’ Meetin’ is an outdoor shindig celebrating all things “partially decomposed remains of plant material” in Whiskyland. This year’s event was held at the Brookside Golf Club (“Gambling is illegal at Brookside, sir!”) which is next to the historic Rose Bowl in sunny, quaint Pasadena, home of a very large parade, a big football game and a little old lady. And when I say AT Brookside Golf Club, I really mean ON Brookside Golf Club. It’s a prepositional thing.

The kids at LASC outdid themselves again with various vendors pouring many iterations of peated whisky at this early evening soiree. After receiving a Glencairn glass, I headed right to the “special” side of the Whisky Tent where the not so common drams were being poured. For better or worse, mostly worse, these tables were positioned right in the Sun’s burning rays making those first pours’ effects a bit quicker than expected. Should have brought the Neutropeata SPF 50.

There was quite an array of choices at this first stop: Bowmore Laimrig 15, Caol Ila Port Askaig CS 19, Connemara Turf Mor, Knockdhu anCnoc Flaughter, Bowmore 10 Dorus More, a 2002 K & L Signatory Bowmore, Caol Ila 12, Amrut Fusion, Amrut Peated Single Malt, Springbank 1995 CS, Caol Ila Whisky Trail 1999, and the St. George’s Peated English Whisky Company to name a few. I’d venture to say that I had only seen or tasted 3 or 4 of these before so it was quite fun delving into the new finds. Baseball cap wearing LASC President, Andy Smith says that most of the list was purchased by the Club from Los Angeles and London locations based on their “we-haven’t-had-them-before-ness” while some bottles were donated by sponsors that couldn’t attend. Exploring new and rare whisky is a goal of LASC. Having fun seems to trump that though. 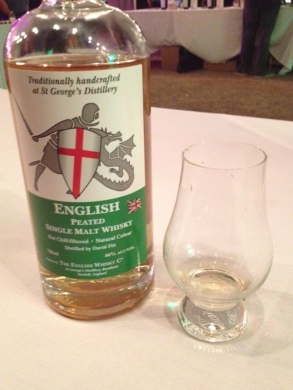 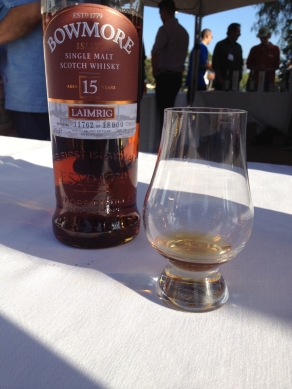 The hard-to-find items were on one side of the whisky tent. The other three sides had great choices all around as well. The Ardbeg table was next to the Laphroaig table which was next to the Jura table which was next to the Lost Spirits table. There was no peat-free table for the peat-allergic. Peat, peat and more peat. Peat wafted in the air so thick that the AQMD could have issued an alert. How thick was it? Well, Ed, it was so thick I believe I saw smokejumpers parachuting in. Uh, ya-ha. May a peated yak marry your sister!

The Other Door, a bar in North Hollywood, had a interesting table of infused versions of Ardbeg Ten. One with pepper, one with apricot, and one with vanilla (my favorite). You don’t see that everyday. There were other cocktail tables with peated favorites but I’m not one to waste my time on mixology experiments when there are drams to try, and food to eat. 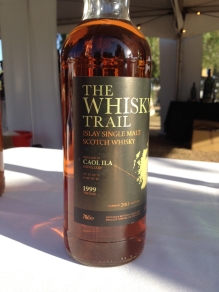 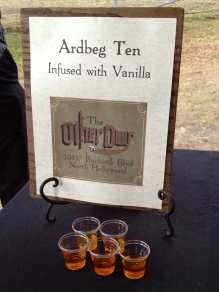 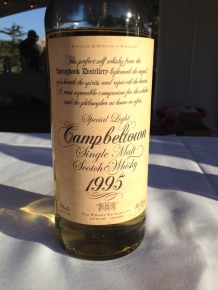 At Peatin’ Meetin’ food is served when it’s ready (you can’t rush good peat smoked BBQ).  This definitely had an effect on the crowd that had been tasting whisky in the bright sunshine for 2+ hours. Stumbling on the golf course was more common than putting at night with the fifteen year old daughter of the Dean. But the wait and stumbling was well worth it. Hickory Creek BBQ served up peat smoked chicken and beef with all the fixins. The smell was so intoxicating for the first few hours, I could have gnawed on the leg of a golfer, or gopher.

The night cooled off and the party went on. There were more drams to try and more visiting with old and new friends. Members of LASC are known for walking around Peatin’ Meetin’ with a bottle of something and pouring it into any random empty glass they come across. Lucky for me, my glass was empty when LASC member Bino Bopal came by with a bottle of Paul John Indian whisky. And there was live, raucous music from The Brick Top Blaggers and Green Ashes, both playing traditional and not-so-traditional Celtic tunes on a stage with the San Gabriels as a backdrop.

Next year’s Peatin’ Meetin’ promises to be bigger and better. President Smith says the LASC’s merry band is made up of smart and talented members who love the event. Damn it, Jim, we’re scotch drinkers, not event planners. “We want more people!” Smith goes on, “There’s no reason why this can’t be the biggest whisky event in the country. It’s already the most fun and most unique…and we don’t have to make a profit.” The brain trust will spitball new ideas as “every great element was a crazy idea that at some point became real.”

Live music, a cigar lounge, a peated barbeque, wacky cocktails and a dedicated app for the event. What more CAN they offer? How about a Mrs. Peat Monster? Where is she hiding? “Mrs. Peat Monster is still just Miss Peatina. Unfortunately Peat Monster won’t commit, much like he can’t commit to any one peated whisky. The ladies love Peat Monster and this causes a bit of jealousy in the relationship. Perhaps if she learned to peat-smoke bbq…” So, maybe Mr. Smith isn’t exactly qualified for a stint on Loveline doling out relationship advice. But he’s more than qualified to put on a Southern California Peatapalooza. He is the Perry Farrell of peated whisky events. And anything that keeps the Big Guy happy is ok with me.