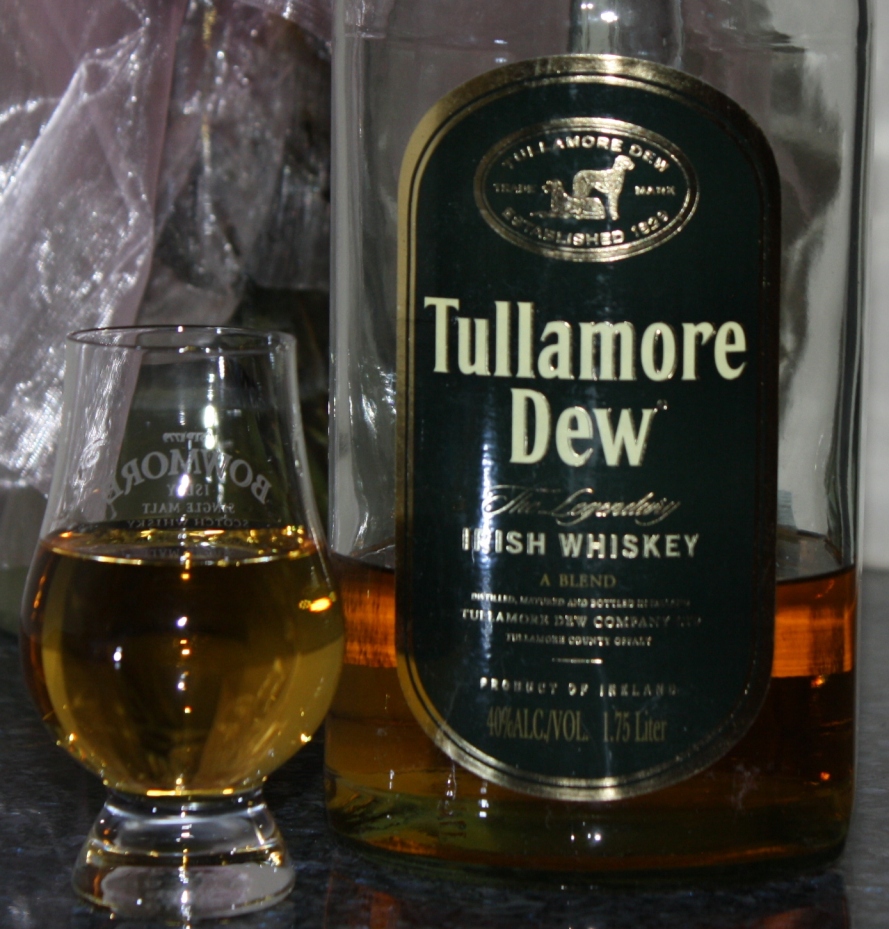 For me, the only Irish whiskey is made by Jameson, but since I’m a good host, I didn’t turn my nose up at this ridiculously large bottle of Tullamore Dew for two reasons:

Anyway, I found myself left with most of a handle, and while I have slowly made my way through the bottle, it occurred to me that I had never reviewed it. So before polishing the bottle off (and making room for two bottles that can take its place) here goes…

Tullamore Dew has a long and storied history dating back to 1829 with the first distillery in Tullamore, County Offaly. The distillery passed through several families over the 19th century, but it wasn’t until Daniel E. Williams took over as the general manager that Tullamore hit its stride (and added the general manager’s initials to the brand). The company suffered through the first half of the 20th century as international politics (war and prohibition) took a toll on the industry. Tullamore enjoyed a resurgence post-World War II: in 1953, Tullamore was bought by Powers who moved production out of Tullamore; in 1994, they were bought by the C&C Group; and in 2010, they were purchased by William Grant & Sons who have pledged to return production back to Tullamore.

Here is what William Grant & Sons has to say about their Tullamore Dew whisky:

The original blended Irish whiskey, known the world over for its smooth and gentle complexity. For one, it is triple distilled and patiently aged in a combination of ex-bourbon and sherry casks, developing its distinctive smoothness. Secondly, being a blend of all three types of Irish whiskey, it has a gentle complexity. The malt and the pot still whiskey we use give it citrus and spicy notes.

And here is my impression of this blended Irish whiskey…

While certainly not on a par with Jameson, Redbreast, or Midleton, Tullamore Dew serves its purpose as a solid blended whisky. I could certainly see the value of this in a cocktail or as a “gateway whiskey”. I myself have been working my way through this massive bottle with my patented Whiskey Water concoction (fill a pint glass with 2/3 water & 1/3 Tullamore Dew), a refreshing and enjoyable beverage during a long baseball game.