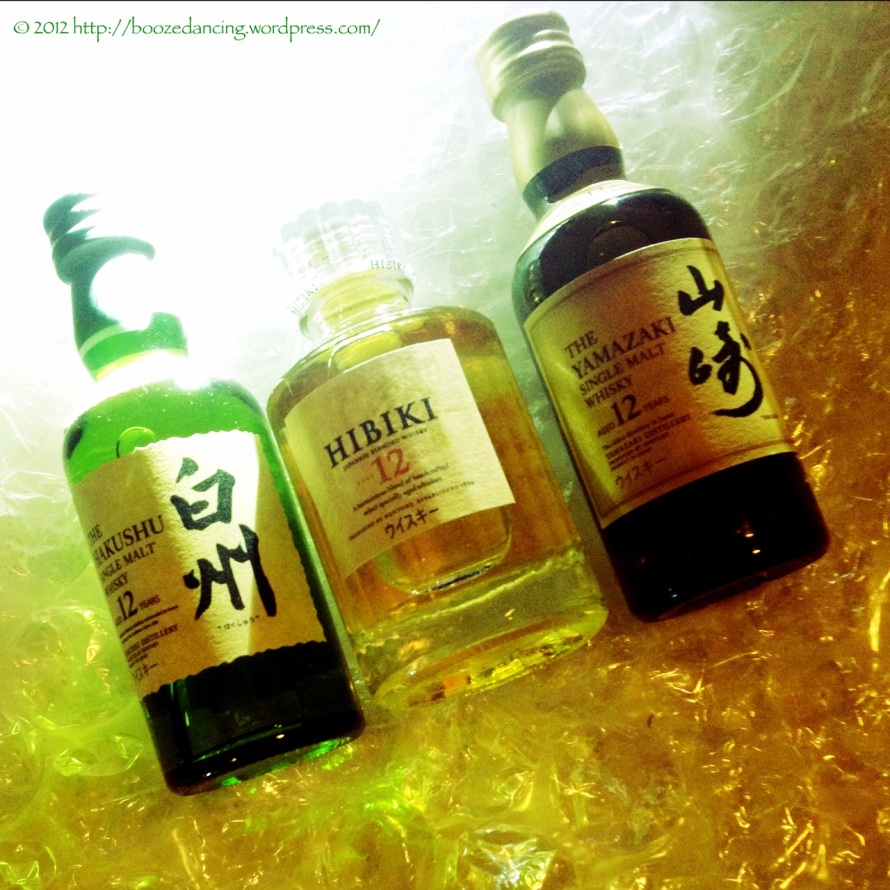 I don’t know if it was the exotic factor or the fact that I am intrigued by Japan in general, but when I noticed the Yamazaki table at our first Extravaganza event, I immediately walked over to give their whisky a try (one does not run at The Union League). To say that it was love at first sip would be an understatement. I’m not going to say that it was the best whisky in the room, but it was definitely an equal to the best Scottish offerings that were available on that very memorable night.

For the longest time, the only Japanese whiskies available in our area were the Yamazaki 12 year old and 18 year old expressions. Then a couple years ago, the Hibiki 12 found it’s way to our area. And just last year, the Hakushu 12 was released in the United States, but I have yet to find it on the shelves at our local spirit shops.

In early November, we received an email from a Public Relations firm in NYC informing us that Suntory Liquors was named “Distiller of the Year” at the 17th International Spirits Challenge. Since I had just read a few excellent reviews of the Hakushu 12, a whisky that I was really looking forward to tasting, I decided to ask the PR firm for some samples. They agreed to do it, and just a few days later, we received the samples that you see in the above photo.

Since there isn’t much information about these whiskies beyond some tasting notes on the Suntory website, we’ll skip the whole “here’s what the distillery has to say about this expression” section and just get on with the reviews…

Conclusion: This is a very nice whisky. And, to be perfectly honest, one that I have had numerous times (I even have half of a bottle in the whiskey cabinet). I find the quality of a whiskey can be judged by how universally it is appreciated (G-LO reviewed this a few months back). In our group, there been rave reviews from the fellas, Pappy, and even Big Jim, the Scotsman of the group. I believe when an actual Scotsman asks for seconds, that is high praise for a whiskey.

Conclusion: Hakushu has been on my “must try” list from the moment that I heard it would be available in the US way back in October of 2011. Was it worth the wait? Absolutely! Once I let this whisky open up a bit, all of the aromas flooded my senses with delightfulness. This whisky smells and tastes fantastic. It’s also incredibly smooth and highly drinkable. I recommend this whisky without any reservations and hope to acquire a full bottle very soon.

Conclusion:  I had had the Hibiki 12 before (I think the Wookie may have brought this bottle to the table) but I don’t think I ever took the time to fully appreciate it. Given a few minutes to open up, the Hibiki 12 was very nice. Not as smooth as the Yamazaki 12 and not as smooth as the 12 years would suggest but very nice. Big, bold, flavorful…this is a fine whiskey. Also, I am a sucker for packaging so what’s not to like about a good whiskey in a great looking bottle.

No Japanese whisky review is complete without the following scene from Lost In Translation, one of my all-time favorite films…

And for a bit more information about the rise in popularity of Japanese whisky, click here to read a recent New York Times article that talks a bit more about the whiskies reviewed in this post. It’s good to know that it’s not just the Booze Dancers that are wild about Japanese whisky!

Thank you to Danielle Katz of Exposure USA for sending us samples of these fantastic whiskies!