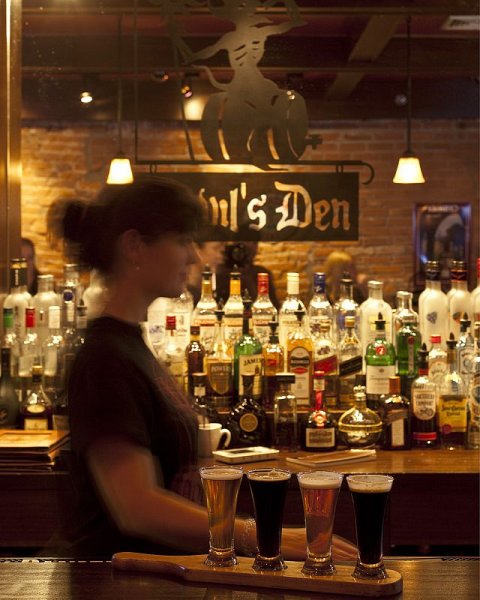 On September 5th, we received the following invitation from Jennie Hatton of Profile PR in Philadelphia:

Brewery Ommegang invites you and a guest

to be one-of-the-first to sample its newest beer

for you to enjoy with the Scythe & Sickle

as well as other Limited Edition beers including

As is the case with many of the invites that we receive, we each had a family conflict that kept us from attending what sounded like a wonderful (and free!) event. This time around, we couldn’t attend because of “Back to School Night” at the local elementary school.

Rather then let this very generous invite go to waste, we decided to ask Miracle Max if he could go in our place. Within a few hours of my email, Max replied and said that he would be thrilled to go, and that he would be taking our mutual friend Jay with him.

Our only request for going in our place: a brief write up of the beer and the event.

Here is what Jay had to say about the Ommegang event at Devil’s Den:

I don’t make it to South Philly often, but that may change…

The Devil’s Den and Ommegang paired up for a great event to show off Scythe and Sickle Harvest Ale, the new fall seasonal from Ommegang. This beer didn’t show itself off in a tasting size, but the draft pint was beautiful. Almost a pumpkin amber with a nice, Belgian-style cream head leaving lots of lacing. The beer is medium bodied, with notes of oat and rye, and slightly toasted and earthy. The house Ommegang yeast gives it some estery character as well. This is a solid fall seasonal that swims upstream against the onslaught of pumpkin beers and mocktoberfests.

The Devil’s Den put out some great food to pair with the five Ommegang offerings. In addition to Scythe and Sickle, they tapped Witte, Belgian Independence Day Tripel, Seduction, and a 2011 Three Philosophers. The Chef incorporated the beers into a variety of small plates, including a wonderful pork belly, basted shrimp, wurst in puffed pastry with Ommegang’s mustard, and the totally ridiculous Seduction brownies. We also had fun talking with Jenny and Clare from DD and Megan from Ommegang.

Thanks to all for a wonderful evening, and to G-LO for pointing us in the right direction!

If you’d like to read more about this event and the beer, click on the following links to see what two other Philly Beer bloggers have to say:

Thanks again to Jennie Hatton of Profile PR for this very generous invite!

Have a @keurig? Know how to boil water?
Our last #Maui #sunset. #Aloha!
#BeerByThePool #lager #lime #maui #beer #craftbeer
There are worse ways to spend a late morning / early afternoon in #Maui…
Yet another fine brew from @mauibrewingco. #CoconutPorter for the win!
Really long drive to and from the Haleakala Summit, but the views and spectacular sunset were well worth the effort!