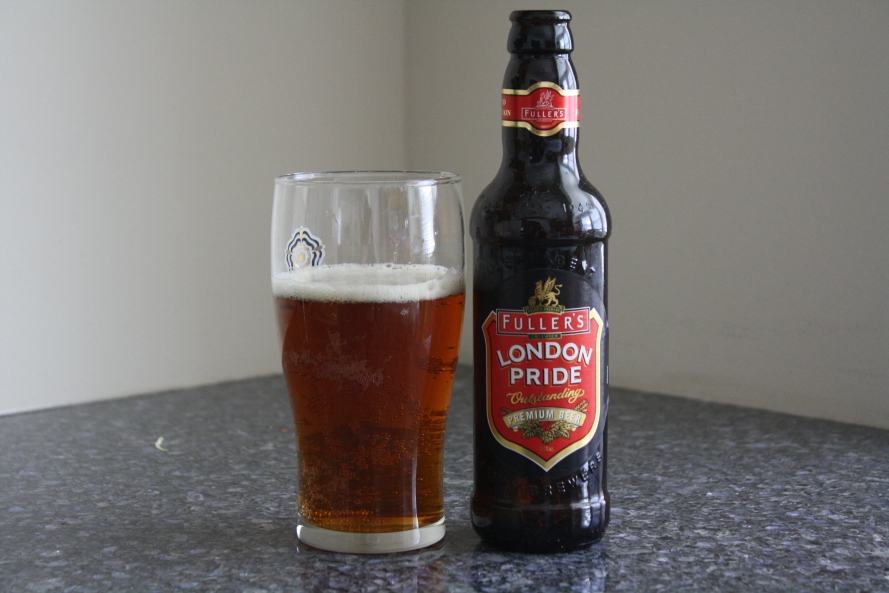 During a recent trip to Wegman’s, I assembled a mixed six with a predominantly English and German slant. The first bottle I pulled out of the six was the Fuller’s London Pride. Now, we had a lengthy discussion regarding aging when I came across a 2010 Fuller’s Vintage Ale and with the help of Miracle Max, we put that theory to the test with 2009 through 2011 bottles. Additionally, awhile back I had the London Porter and the Gale’s Prize Old Ale. So, the folks at Fuller Smith & Turner are not an unknown. The London Pride is an English Pale Ale and the UK’s leading premium cask ale. Fuller’s is known for the London Pride as well as a number of other award-winning ales such as Chiswick Bitter, ESB and 1845. Fuller’s is the only brewer to have had three of their beers (London Pride, ESB and Chiswick Bitter) named Champion Beer of Britain.

Here is what Fuller’s has to say about its London Pride:

Known and loved for its distinctive, rounded flavour, London Pride is the award-winning beer for which Fuller’s is most famous. In recent years its popularity has grown to the extent that it is now Britain’s leading premium ale: a welcome fixture in many pubs and off licences around the country, and now winning new friends abroad.

To the beer afficiando looking for the classic English pint, we say this: Whatever you do, take Pride.

I found the London Pride to be…

As I do with all of the beers, I passed the glass over to my better half. Her response, “this is actually good” should be considered high praise for this beer. I think the London Pride is every bit as good as advertised.

#Bubbly
We’re taking a deep dive into the peatier side of @springbank1828 with a review of their #Longrow #Peated Single Malt Scotch #Whisky. Click play to hear our many thoughts about this mighty delicious dram!
The fine folks at @olesmoky #Moonshine have created a holiday ready libation that they call #ShineNog. To find out if this #libation is as tasty as it sounds, click the play button.
It’s been a little over 12 years since we last reviewed this #quartet of @lindemansbeers #Lambic #beer. Fair to middling were our 2010 impressions. To find out if our tastes have evolved at all over the past 12+ years, click play.
We kicked off #Thanksgiving week the RIGHT way with a #book and #whisky launch event at @artintheage to celebrate the release of #BrandMysticism by Steven Grasse and @aarongoldfarb plus the launch of #Dunce #Whiskey. Solid chats. Well crafted #cocktails. And some tasty spirits. What more do you need?
Broke out the old #CanonAE1Program and shot off a roll of #blackandwhite #film. You gotta love the mechanical feeling of #analog. And cheers to @richardphotolab for doing a great job with the scans!