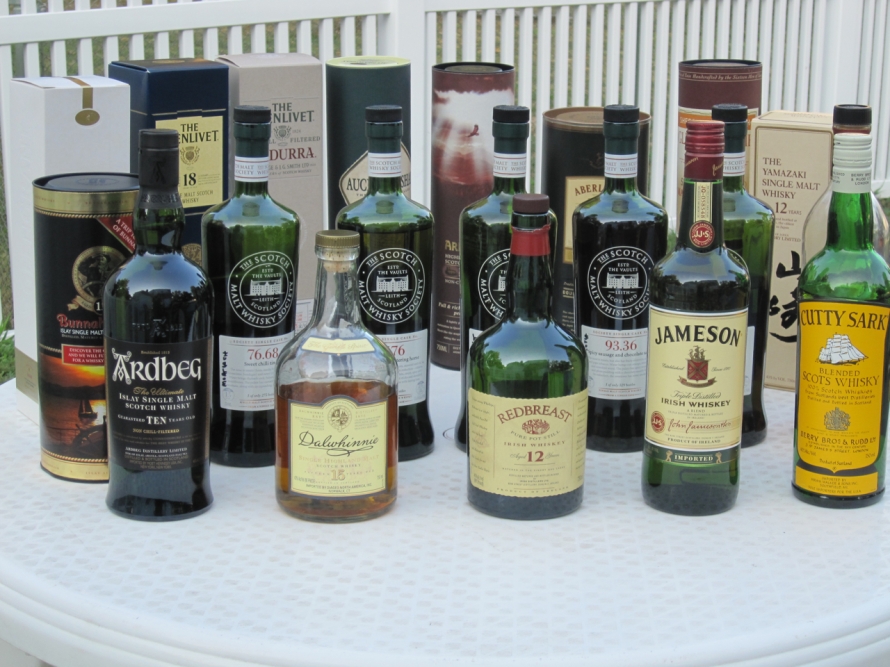 My brother-in-law’s parents (Big Jim and Mrs. Jim) were visiting from England and I took it upon myself to call an emergency meeting of the Kipling Road Whisky Society. I thought since an actual Scotsman was visiting we could use this as an excuse to spruce up whisky al fresco with the usual suspects. Also, I thought I could use this as an opportunity to violate the unspoken rule and invite our better halves. The night began with a healthy feed bag and Big Jim and my pappy once fed were looking like little kids at Christmas and itching to go visit the great outdoors. Not one to hold back the wishes of the elderly (I should look as good), I soon obliged. The table was loaded with the usual suspects from Scotland and Ireland as well as a bottle of Yamazaki and a couple of bourbons.

Big Jim brought a Glen Grant 10 that was quite tasty and then we moved along to a sample of the rest of the table. I quickly cautioned my pappy that he could not continually sample the Nadurra and then call it a tasting. Although as the other Mrs. had turned their attention to the fine work from Three Olives, I did allow Mrs. Jim to refill her glass several times with the Glenlivet 18 since at least she was playing along. Also, I have to give kudos to my mother-in-law after she turned down the whisky, she did finish what I thought was a healthy bottle of Frangelico. And, while my father-in-law is not a fan of whisky he did manage to wrest a little Frangelico from his Mrs. and then found Pisa to his liking.

Big Jim at 85 years old had himself 9 samples and called it a splendid night. My pappy even managed to make it back home under his own power. All in all a good tour of the world, with an unusual stop in Japan. Everyone had a taste of the Yamazaki 12 and found that the people of Japan have made great inroads in the making of whisky.