I recently spent some time in Washington, DC for work. No, I wasn’t called before a Senate subcommittee and asked about my contact with Russian agents. And, no, I wasn’t brought in through the back gate of The White House to help escort Reince and Spicey from the building. I was in DC for a corporate training event.

Not one to focus on details, I decided to go to DC at the height of the summer. While there were more than enough trains to get me there, the availability and affordability of hotels was quite problematic. Apparently, during the summer, people actually go on vacations, and they even go to Washington, DC. Okay, so maybe that’s a little detail that I probably should have been more aware of. Anyway, I found myself headed to DC and was able to get a room by the rail yard for a mere $629 per night. In a rather comical (and expensive!) series of cab rides, I took a cab from Union Station to the office and then took a cab back to my hotel which was near Union Station. It would’ve been more cost effective if I had just slept in the train station, but my company, while not splurging for first class, really frowns upon selecting hobo class.

Back at the hotel, I managed to bring the rain, so rather than head out to any of the local watering holes that G-LO was kind enough to suggest, I ducked across the street (see what I did there?) to Five Guys and headed back to the hotel for a bottle of beer to quench my thirst. While perusing the bucket of beer that was on display at the hotel bar (apparently, happy hour had just ended; naturally), I looked for one that I’d never had before. In keeping with my “Shiny, Pretty Packaging” M.O., my selection was made when I found the one with the beautiful label that you see in the above illustration.

Eight Point IPA is from the Devils Backbone Brewing Company. Founded in 2008 by Steve and Heidi Crandall, what began as a crafty brewpub (now the Basecamp) has expanded into a full-fledged brewery (the Outpost). The brewery has brought well-crafted and award winning beers to the resident of MD, DC and VA. Since its founding, the brewery has been awarded nearly 2 dozen medals at the Great American Beer Festival. As the leading and fastest-growing brewer in Virginia, Devils Backbone caught the eye of AB InBev and, in 2016, became another one of AB InBev’s strategic craft acquisitions. With a commitment from Steve Crandall to remain involved “for many years”, it is hoped that fine craft beers will continue to be brewed for weary travelers like me to enjoy.

This is the first batch of beer we brewed after the conception of Devils Backbone Brewing Company in 2008. Our brewmaster Jason Oliver was thinking about how to design the IPA when he heard a rustle near his fence line (just touching the woods) where he saw two young proud eight point bucks walking along it. He decided to name the beer after those young bucks as it seemed to fit the spirit of the beer, which is proud, brash, youthful, yet approachable.  Citrus, Pine, Snap.

Now that we know a bit more about this beer, let’s get on with the review… 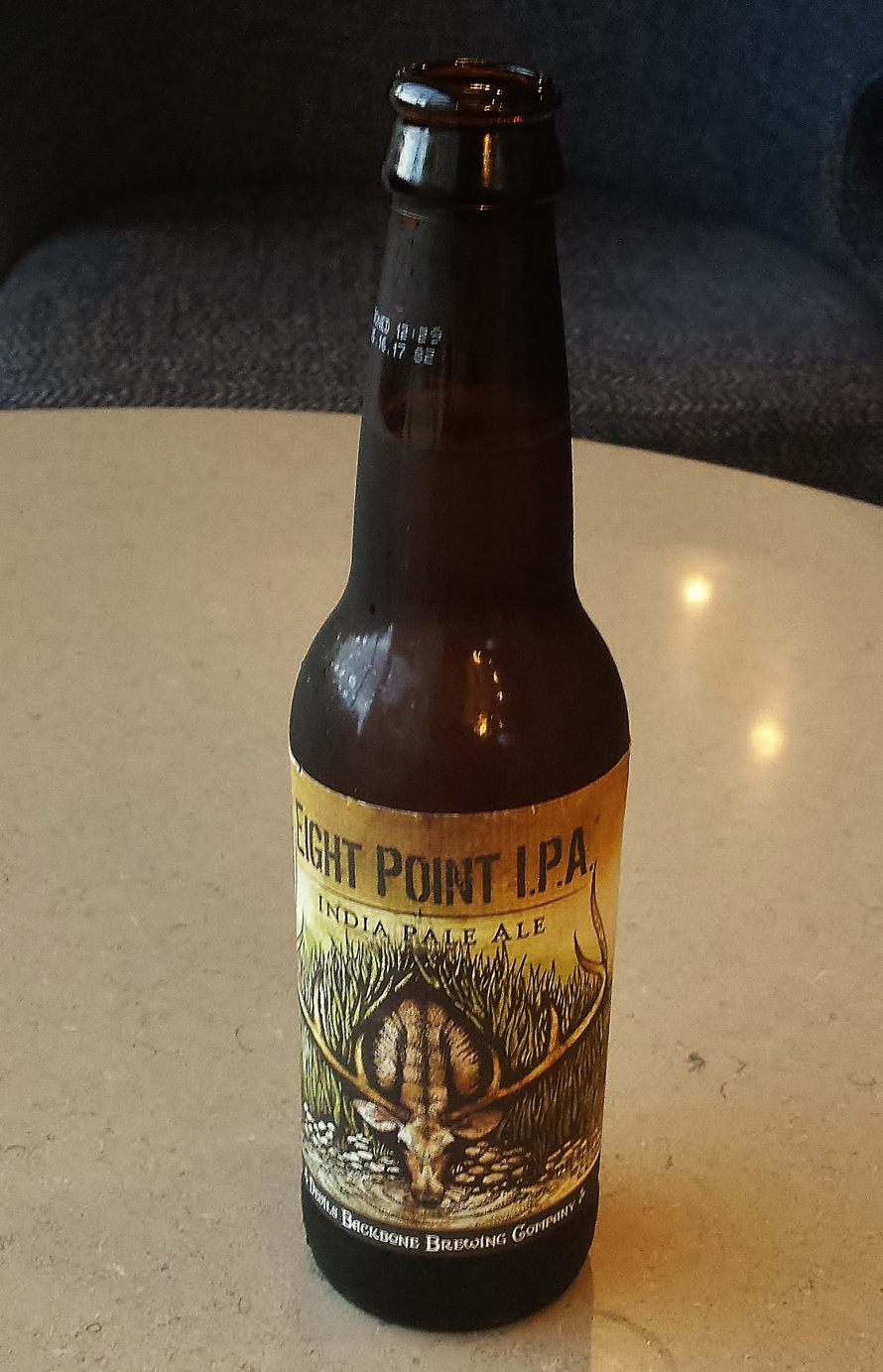 This was my first go with the Devil (well, that might not be entirely true). Overall, this beer was good, but not great, with the flavors coming one after the other rather than in a more cohesive and complementary fashion. For what it was (something to wash away a day of travel and training), it was good enough. I’d like to try this on tap. Or, try the 16 Point IPA (Imperial India Pale Ale).