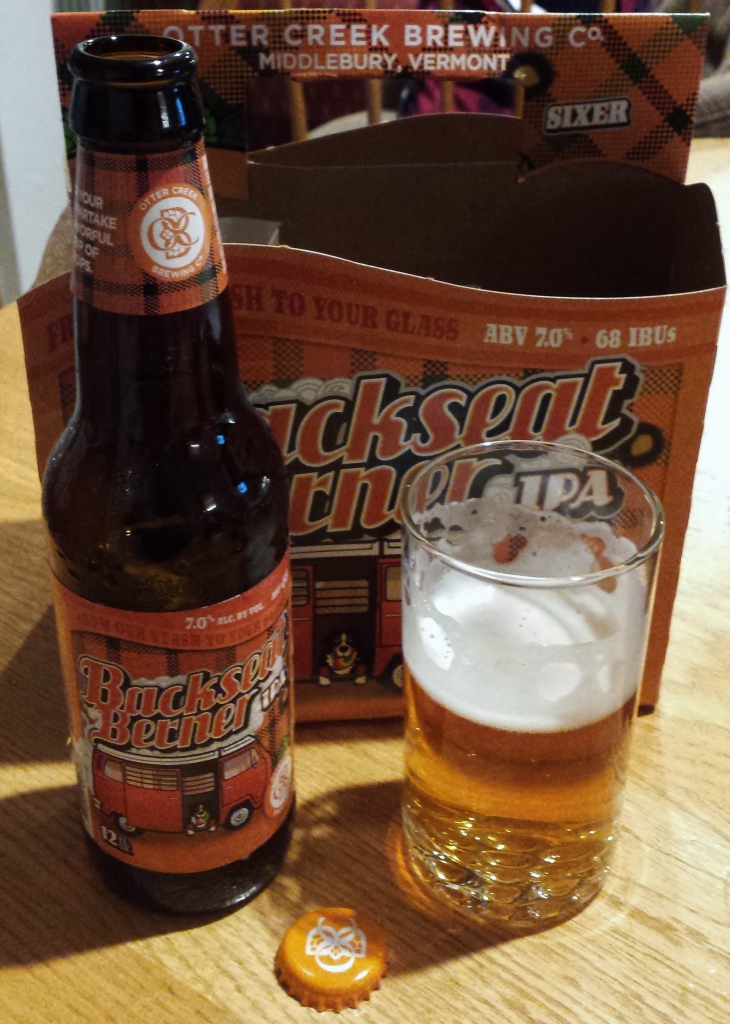 With summer winding to a close, we (and by we, I mean Benita, The Urchins, and yours truly) headed up to Vermont for one last trip before school starts up again (Yay! School is finally on the horizon). While enjoying the great outdoors in Smugglers’ Notch, I found myself involved in far too many physical activities. Sitting and converting oxygen to carbon dioxide is the upper limit of my daily ritual, so days spent swimming, hiking, canoeing, and human foosballing (yes, that’s a thing. Thankfully, I was just a spectator) are well beyond me.

In the evening, in need of some liquid refreshments (for medicinal purpose only), I picked up a few six-packs. One such six was the Backseat Berner IPA, from Otter Creek Brewing Co. of Middlebury, VT. Otter Creek was founded in 1991 and now, after nearly 25 years, produces three year-round beers, four seasonal and three limited release beers. In 2010, Otter Creek was acquired by Fulham & Co., a private equity firm in Wellesley, MA  through its Long Trail Brewing Company subsidiary.

Before we begin the review, here’s what Otter Creek has to say about the Backseat Berner:

This brew clocks in at 7% ABV with 68 IBUs, so load up your buds and partake in this juicy exploration of American hops.

And, now for the review…

After a long day, I found this to be a great way to unwind. With a nice balance and a great flavor, this was just a really nice IPA. At 7%, it may have been a little boozy, but that little extra kick is exactly what I needed to forget the horror that is human foosball. I’m guessing that whoever came up with that sport may have had way too many high gravity beers in a row.