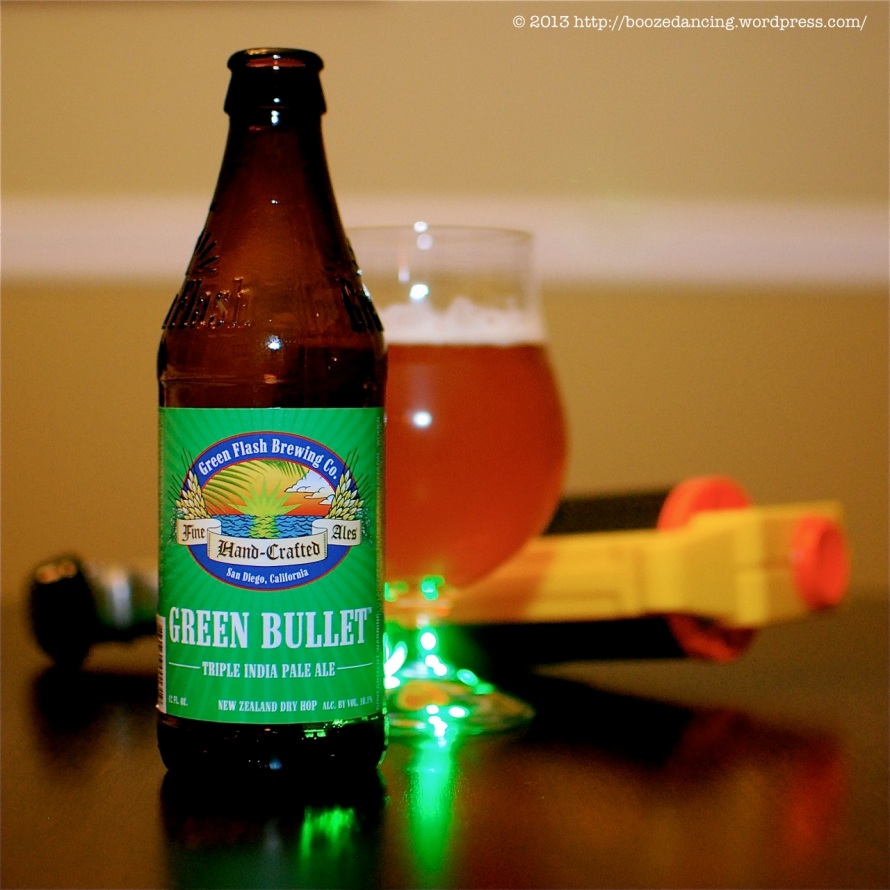 A flash of green to go with my Green Flash…

One of the beers available that night was the Green Flash Green Bullet, but I didn’t order it. I went with the latest from Victory Brewing Company instead, i.e. their DirtWolf Double IPA. The Alemonger had a glass of the Green Bullet and was kind enough to let me try it. I liked what I tasted, so when I saw it on the shelf during a recent beer run, I knew that I had to pick one up for an upcoming review.

Here are a few words about this beer from the Green Flash website:

Named after a super-robust New Zealand hop, Green Bullet™ is a well-balanced Triple IPA being bottled today for the 1st time ever. Brewmaster, Chuck Silva initially released this Pacific Gem to celebrate the Green Flash 9th Anniversary in 2011, and it was an immediate hit! Now, this cult favorite will be available from coast-to-coast as a seasonal release from September through December 2013. Be on the lookout for this high-caliber addition to our arsenal in 4-packs, 22oz bottles and on draft, because you do not want to miss the release.

A definite sipper! That’s how I would describe the Green Flash Green Bullet. Overall, I really enjoyed the medley of flavors in this beer along with the bigness of it all. Not something I would drink all the time, but when I’m looking for a high octane IPA, this is definitely a beer that I would consider.

If you want an alternative view, click here to check out Beerbecue’s hilarious and spot on review. And speaking of Steve McQueen…