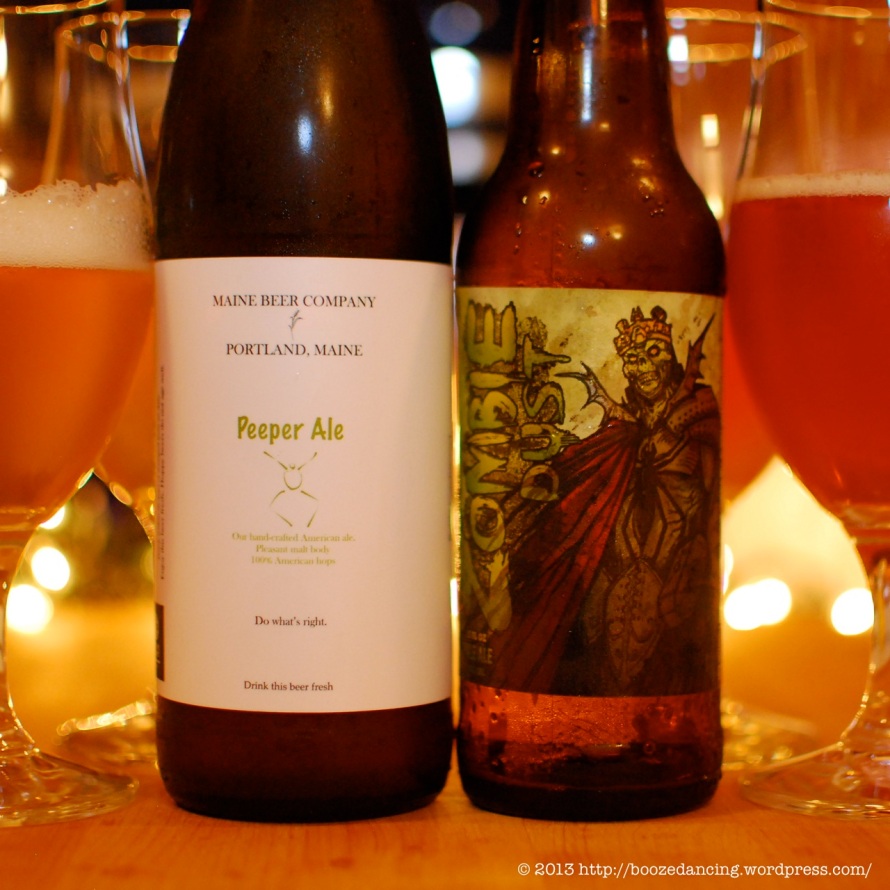 Before we get into our review, let me get a couple things out of the way…

Last summer, we scored a four pack of The Alchemist Brewery’s Heady Topper thanks to Megan Moore, a fellow Philly Beer Geek and sales representative for Evolution Craft Brewing Company. This all happened via Twitter when she announced that she would be doing some beer hunting in Vermont and asked if anyone would like her to bring back a serious ungettable.

Back in early May, Megan announced yet another Craft Beer road trip. This time, she would be headed to Chicago, and planned on stopping by Three Floyds Brewery in Munster, Indiana. Once again, I replied to her Twitter message, and once again, Megan said she’d try her best to save me some beer. Thankfully, Megan had some Zombie Dust to spare, so a couple days prior to Philly Beer Week Opening Tap, I met up with her in Center City Philadelphia to pick up my six pack. The interwebz are a truly magical place!

By the time you get to the bottom of this post, you will realize that the only thing Peeper and Zombie Dust have in common are the words American Pale Ale. So why did I pick these two beers for a side by side tasting? The following comment from The Alemonger is what put this idea into my head:

I’m beginning to think they <Maine Beer Company> might be New England’s answer to Three Floyds, though without the hype or colorful label art. I can’t imagine their capacity is any larger than Three Floyds either, yet they’re distribution footprint is much larger (for now, anyway).

Although the beers weren’t perfectly matched for this face-off, since Limpd and I went to the trouble of tasting these beers side by side, I figured that we may as well carry on with this review. But before we get to our conversation about these two very different beers, let’s hear what the brewers have to say about them.

Here is what Three Floyds has to say about their Zombie Dust Pale Ale:

This intensely hopped and gushing undead pale ale will be ones only respite after the zombie apocalypse. Created with our marvelous friends in the comic industry.

And here is what Maine Beer Company has to say about their Peeper Pale Ale: 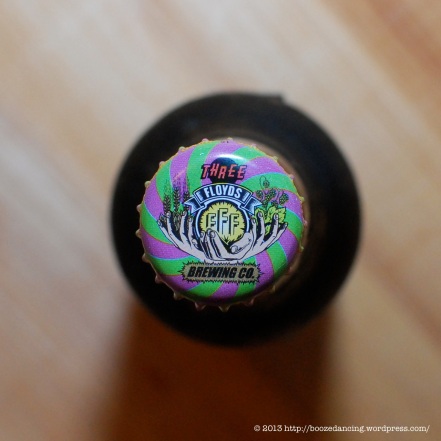 G-LO: I popped the top on my bottle of Zombie Dust, but it didn’t make THE sound. Let me pour it to see if there’s any carbonation left.

The beer makes a “Glug glug glug…” sound as G-LO fills the glasses.

Limpd: That doesn’t look good. I can’t tell you the last time that happened to me. Good thing I brought another bottle!

G-LO pours the second bottle of Zombie Dust, but this time with much better results.

Limpd: Well that certainly looks better! So tell me Alistair Cookie, what’s it look like to you? I’m seeing a cloudy, light amber colored beer with some decent foam. Pity that foam doesn’t linger all that long.

G-LO: Alistair Cookie? I’m guessing that wasn’t a compliment. When I look at MY glass of Zombie Dust, I see a pale and cloudy red-orange colored beer with fluffy, off-white foam that peaks at about an inch and then dissipates really slowly. I also get some moderate lacing.

Limpd: I’m gonna try real hard to avoid using that word you like so much. It rhymes with LaLoosh! Interestingly enough, a bit of lacing improved Nuke LaLoosh’s pitching in Bull Durham. I doubt very much that it’ll have a positive effect on your writing. My advice: stick with Fruit of the Loom and leave the lacey stuff to the pros.

G-LO: While we’re on the topic of Bull Durham, did you know that Esquire recently called it the greatest sports movie of all time? Now that we’ve gone completely off the rails, let’s stop lollygagging and get back to the review…

What did you get when you stuck your nose in the glass? I’m definitely getting a good bit of hoppiness. It’s big on the grapefruit and pine tree scents but with a touch of honey scented malt in the background.

Limpd: Like you can even tell the difference between a grapefruit and a tangerine. In my humble and non LaLooshy opinion, it smells kinda doughy with a big hit of hops and a little funk. Or maybe that’s just your natural musk wafting across the room.

G-LO: No way Man. As usual, I’m as fresh as a daisy! Can we taste this thing now?

Limpd: Right. Cause I’m the one holding us up. I’m going in…

G-LO: I’m liking this! Pretty smooth and creamy, yet not overly bubbly. I think the hops just gave me a big hello. So so citrusy!

Limpd: Agreed. Not much in the way of carbonation, but definitely pretty smooth. I’m finding the hops to be a bit on the sweet and syrupy side. I like the finish on this one. A little bitter. A little sweet. Nice stuff!

G-LO: Totally with you. I tasted a good bit of honey sweetness towards the middle and I really like how it all comes together in the end. Let’s hold off on final comments until after we try the Peeper. I’m really curious to see how these two beers compare.

G-LO goes back to the kitchen to pour the Peeper…

Limpd: Whoa! That is some seriously thick foam on this one. It’s bottle conditioned right? I’m surprised at how much lighter in color it is. Cloudy golden yellow according to my surgically enhanced vision. Colonel Steve Austin’s got nothing on my peepers!

G-LO: Good call on the bottle conditioning. I’m pretty sure it is. And since we’re dropping pop culture references like Quentin Tarantino on a Miller 64 fueled script writing bender, perhaps you should call Oscar Goldman about that hip of yours. As far as the look of the Peeper, cloudy golden yellow it is! Such a pretty pour.

G-LO: My apologies. I’ll try to maintain my objectivity. Have I mentioned how fantastic this beer smells? Every time I stick my nose in a glass of Peeper I get visions of that pizza place in Kittery, ME and the first time I had this beer. I get super fragrant citrusy hops that remind me of freshly grated orange and lemon zest coupled with some sweet biscuity malts.

Limpd: As much as I want to give you a hard time, there’s no denying that this beer smells fantastic. Totally getting those citrusy hops, but I’m finding the malts to be rather subtle. A definite hoppy tang on this one!

G-LO jumps ahead and takes a sip. Limpd follows along and does the same…

G-LO: Peeper is a good bit more carbonated than the Zombie Dust. I love the texture of this beer. So smooth and creamy.

Limpd: Agreed. Definitely creamy, but I think the carbonation isn’t all that different from the Zombie Dust. Peeper leans pretty heavily on the grapefruity hops, but in a very good way. For a beer that’s only 5.5% ABV, this has some really big flavors. What do you think of the finish? A whole lot dryer and crisper than the Zombie Dust.

G-LO: I can’t argue with your assessment. All that stuff I picked up in the nose comes through in the taste. Big time grapefruity hops and a hint of sweetness followed by a crisp, dry, and mildly astringent finish.

Limpd: There you go again. Do you think we can finish up this review without you LaLooshing all over it?

G-LO: I’m not gonna make any promises, but I’ll certainly try my best. So do we have a winner?

Limpd: I know I’m gonna catch hell from all the Craft Beer geeks for saying this, but I definitely preferred the Peeper over the Zombie Dust. Don’t get me wrong, Zombie Dust was a really good beer, and I would definitely drink it again (I would love to try it on draught!), but the Peeper was more in my wheelhouse. I found the Peeper to be crisper, better balanced, and much more flavorful. Personally, I can’t help but think that the Peeper moves more towards an IPA. I know that both of these beers are called American Pale Ales, but to me, they seemed like completely different beers.

G-LO: As much as I would like to, I can’t argue with your conclusion at all. I too preferred the Peeper. Every time I have it, I’m reminded of my summer vacations in Maine with Mrs. G-LO and the Boys. Given all of that emotional baggage, I don’t think Zombie Dust ever stood a chance. That being said, I would love the opportunity to try more from Three Floyds. Road trip?

Once again, many thanks to Megan Moore for the Three Floyds hook up!