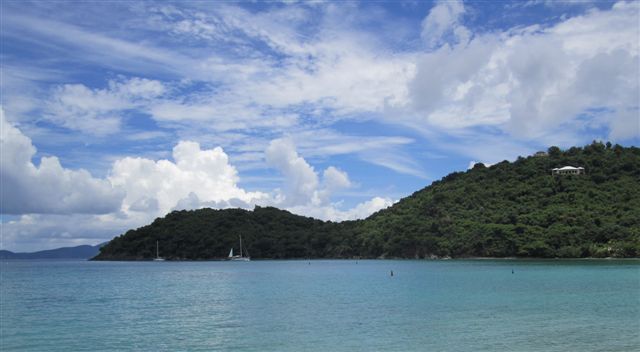 Ok, so I have been meaning to write this post for a while, last summer I had the good fortune to spend two weeks in the U. S. Virgin Islands on the beautiful island of St. John with my family.  Beyond the snorkling, hiking, sailing, and relaxing we also chose to explore all the drinks and food that St. John had to offer.  My personal challenge was to not drink the same beer twice.  I thought for sure that I would be drinking nothing by Corona, Red Stripe, and Carib but I was pleasantly surprised when I came across the brews from St John Brewers.

First let’s be clear, this is not one of those brewery reviews where I tell you about how I toured the brewery and marveled at the modern brew equipment and bottling lines.  To do that I would have had to vacation in Maine since Shipyard Brewing Company brews and bottles for St John Brewers.  Brewing good beer in any quantity in St John would have been a true feat, and rather expensive, with St John’s limited resources.  Heck brewing this beer on the mainland is probably more environmentally responsible and allows for distribution outside of the USVI’s.

So what about the beer?  I sampled all four of St John Brewers’ bottled beers:

My first brew was the Island Summer Ale.  This beer pairs the body and flavors of a wheat ale with the light crispness of a pale ale.  At 4.5% ABV it is very refreshing and the perfect beer to cut the heat of the forever summer of the island tropics.

The Tropical Mango was selected by the Wookette.  I was not too keen on a beer with mango in it and my suspicions were confirmed.  This is are really fruity beer (maybe even too fruity for LimpD).  But the Mrs. liked it and occasionally went back to this brew over rum drinks throughout the vacation.

Okay, now we are starting to move toward more “crafty” and away from the watered down Caribbean thirst killers.  The Liquid Sunshine is a Belgium inspired spiced wheat ale similar to Blue Moon but it seemed spicier.  Liquid Sunshine indeed!

The Island Hoppin’ IPA was the last of St. John Brewers beers that I tried and I wish it had been the first.  Of their line-up, it is by far the most flavorful.  Citrisy, floral, with a crisp hoppy finish.  Hophead in paradise.

Final verdict:  The brews from St. John’s Brewers are not groundbreaking but they are some of the better beers you will find in the Caribbean.  If you are in one of the states they distribute in (check here) give them a try and enjoy a taste of the islands.

The Wookie’s quick tips for travel to St. John:

UPDATE – 5/2011 – Note that rumor has it that Baked In The Sun is closed and has been replaced by a deli and takeout place.  I’ll have to confirm that and maybe find a new stop for lunch when I head down to St. John later this year.