There’s been much written about Disney’s re-imagination of their theme parks; now heavy on Star Wars, the Marvel Universe, and lower admission prices very light on Mickey Mouse. Folks travel from near and far to “The Happiest Place On Earth” (not to be confused with OUR happiest place on earth), or at least in Anaheim. But the best bang for your entertainment buck in the Southland just might be a distillery in the Arts District of downtown Los Angeles. No churros, but you will get a crash course in a newfangled way to make whiskey with tiny doses of chemistry and bucketfuls of FUN!

On a recent Friday night excursion organized by Shauna Der aka The Minty, the well-known LA food and drink blogger, a small band of adventurers met at the Lost Spirits headquarters. We were met by the ever bubbly Joanne Haruta, one of the distillery founders with master distiller Bryan Davis. Joanne filled us in on the distillery’s reopening after a fire earlier in 2019 closed the operations, leaving the brain trust with a bit of soul searching and a bigger opportunity to take Lost Spirits to another level.

Mrs. Satellite Engineer joined Yours Truly again on the exploration of this new version of Lost Spirits. It doesn’t seem too long ago that Bryan and Joanne hosted the two of us only a few months prior to the grand opening of the first iteration of their new LA home not far from the current one. We were mesmerized slash agog by the behind-the-scenes tour while wood and copper were still being cut and smoothed as the details were still being hammered and honed. Taking that tour left us dazzled by the sheer entertainment and audacity to come up with such a unique and fun experience for any visitor.

This imposing door is the entrance to the new Lost Spirits Distillery. Hold onto your hats. It’s unlike any distillery you’ve ever seen or been to before… 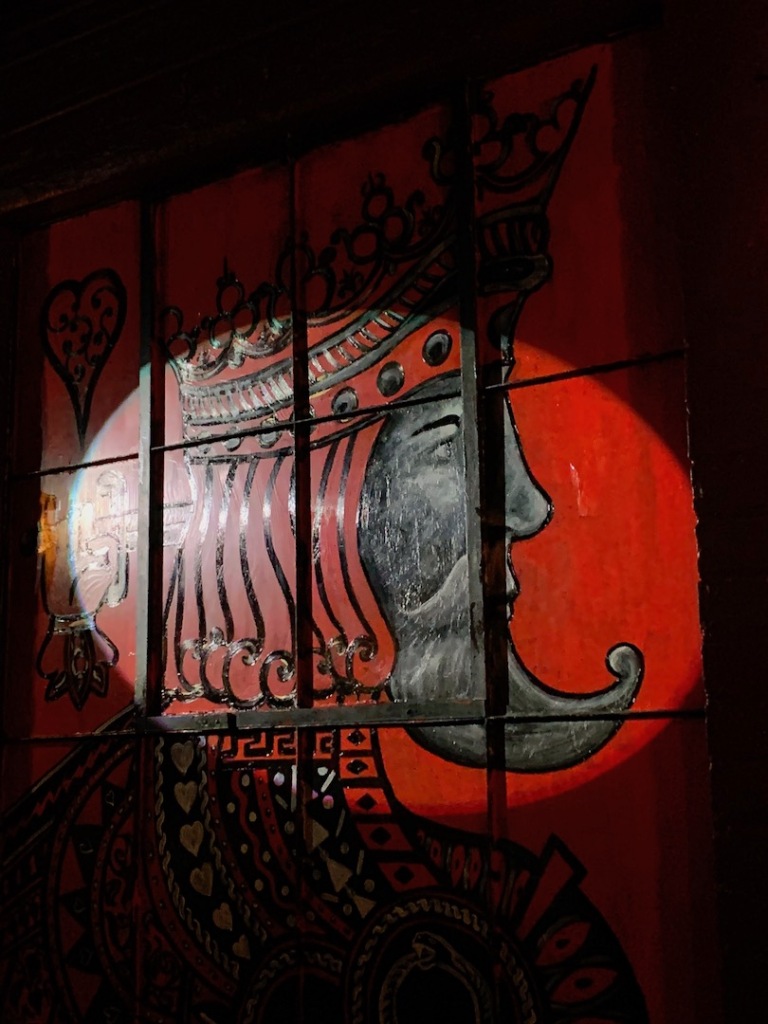 It’s a place for Kings 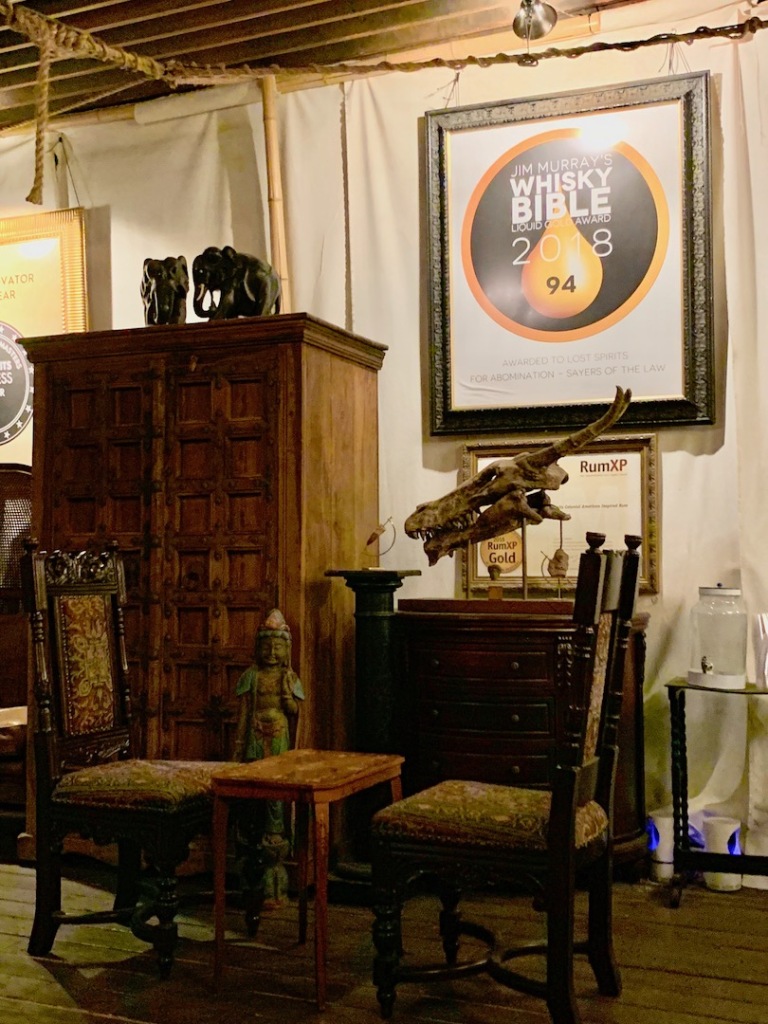 First stop along the way is an ode to Lost Spirits’ past. It’s a den of sorts furnished with various artifacts from their previous  travels.

And the whisky adventure started long ago with one…Leviathan I. 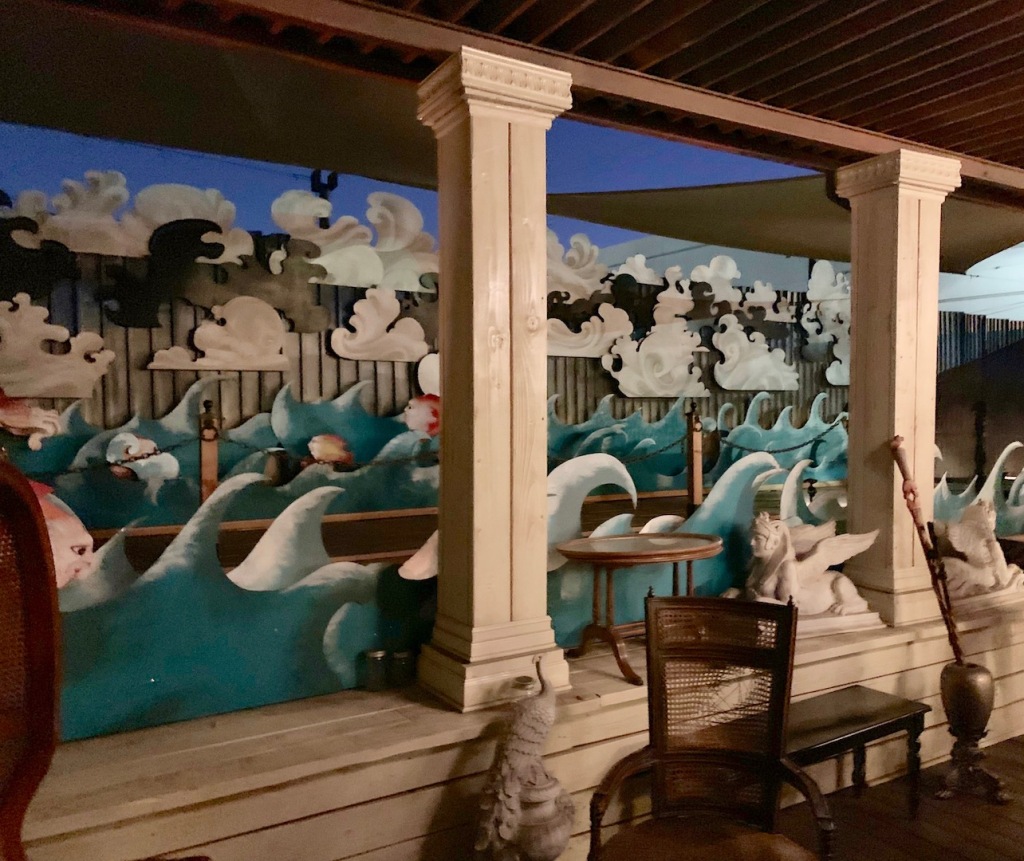 Many journeys of any value start at the sea where the waves can take you most anywhere. Our night of exploration started out near the water’s edge too.

But first we had to hike through a jungle in the dark of night.

Luckily, there were candle-lit paths for us to follow. 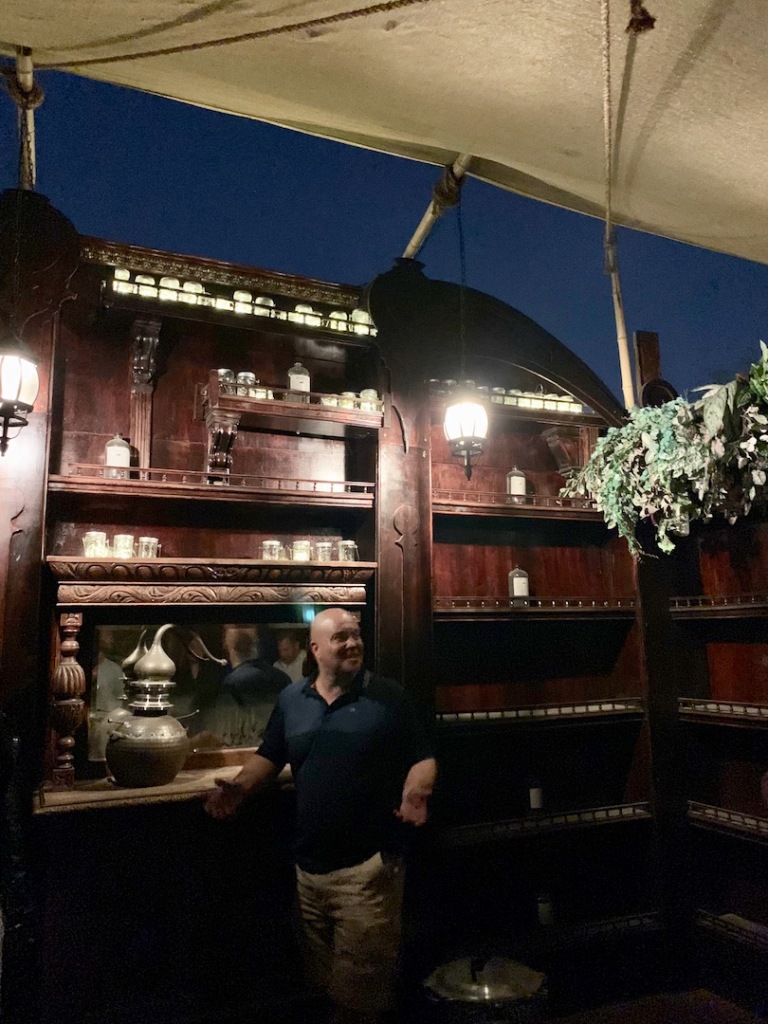 We ended our hike in the fabled Library from the old facility with Bryan preparing us for a short walk to the nearby dock. Yes, I said dock, Doc.

There was a trip down a glassy river like at the previous Lost Spirits distillery, but this time we were under the Los Angeles sky.

The gentle sail was cozy enough along the river, but it was as dark as you can imagine.

Our merry band knew not of where we were headed.

The bow of our ship gracefully led us to port at the terminus where we disembarked.

And a short walk led us to a…

…submarine (on wheels) where we began another voyage. This time, under the sea.

Luckily there were portholes so we could see into the watery depths.

Of course, The Minty was there with rum in hand.

About 20 minutes later due to the horrible LA undersea traffic, we surfaced, and then came into port at the actual nuts and bolts of the Lost Spirits distillery. 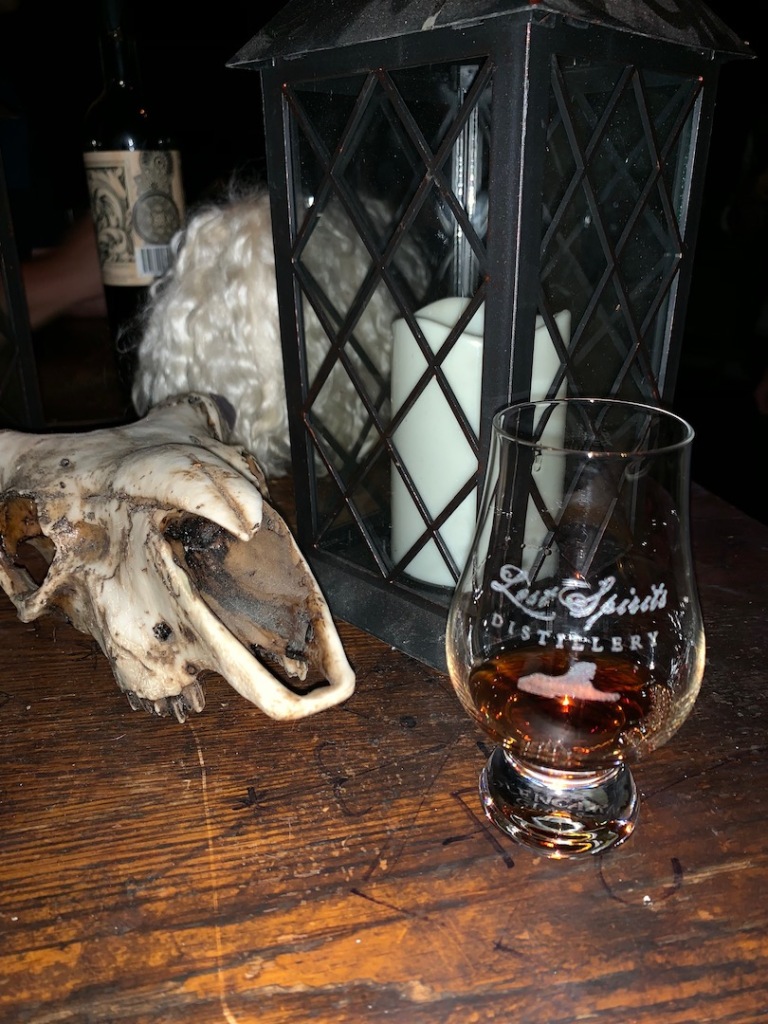 We were led to the fermentation room where Bryan poured us rum and talked in-depth about The Yeasties and the intimate and somewhat gruesome details of the carnage that the fungi bring down on the unsuspecting soup.

Look away from the carnage if you can’t bear to see The Yeasties chow through another barrel. 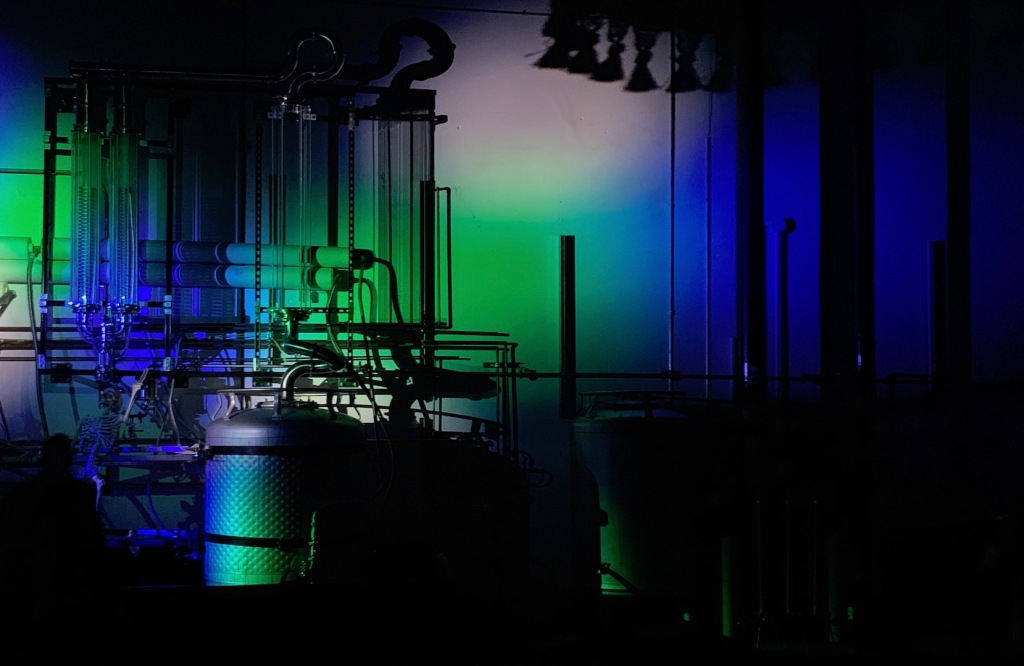 Of course, there’s a still. Why wouldn’t there be a distillation machine with tubes and pipes and knobs and doodads all cast in shadows like a Bauhaus show in London circa 1980?

Next, we traveled to the “barrel” room via a colorful open-air tram befit a royal caravan traveling through ancient India.

The short trip started in a lightless room but our eyes had to adjust quickly to a blinding brightness that appeared with a tap of an iPhone, probably an XS, but possibly an 8. 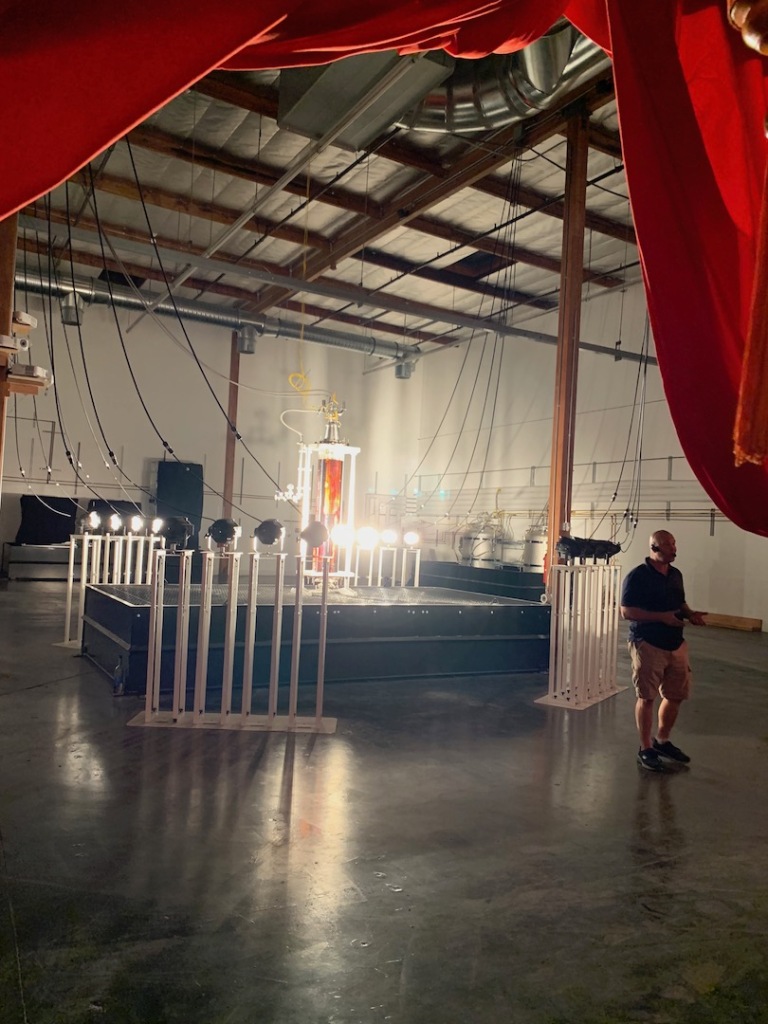 The aging area was visible from the left side of the tram as the red curtains pulled open. But there were no barrels in sight!

Bryan’s rapid aging machine – famous for flooding innocent young spirit and bobbing chunks of wood with high heat and light – stood atop a stage like a rock star, while the high-intensity lights focused directly on the spirit chamber at dead center.  It spoke loudly of “No Brown M&M’s”.  A true rock star.

From the non-barrel aging room, we made our way to the Research & Development department which was akin to a molecular lab without card key access.

And there was a Japanese styled sand garden which allows the Lost Spirits creative force to find inner peace and quiet moments as they create their rum, brandy, and whisky, as all spirits need a clear spirit to start. 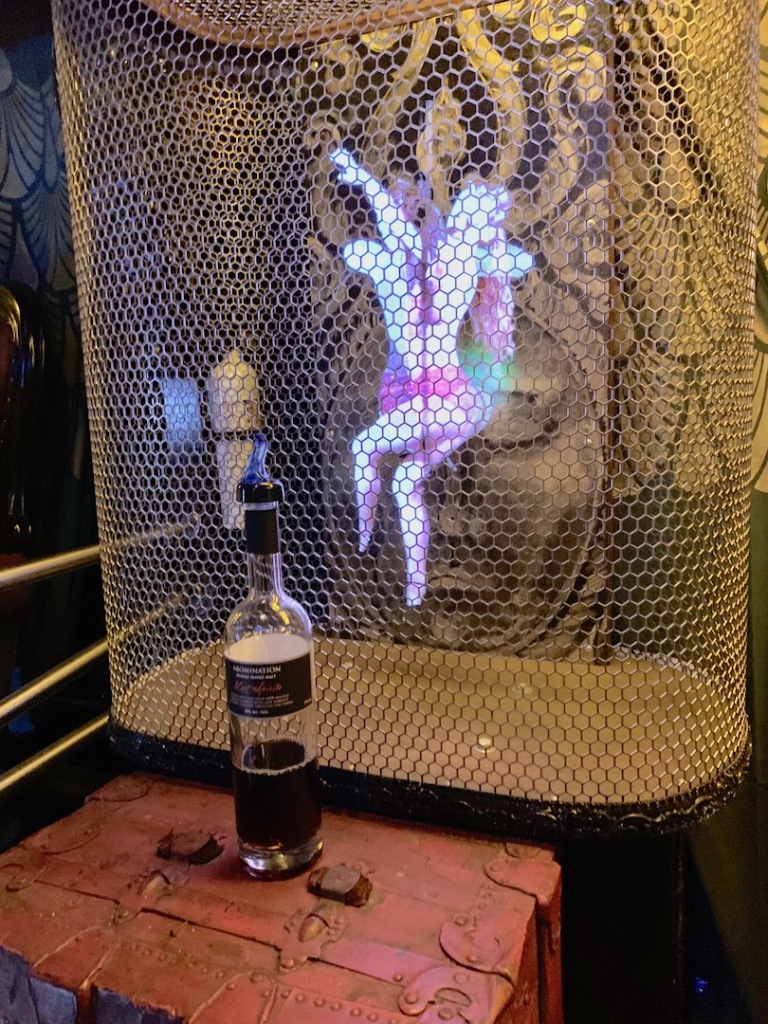 But it was time to go back to where we started. This time we traveled by coach and were entertained by hologramic burlesque dancers as we sipped the Abomination “Sayers of the Law” whiskey, one of two heavily peated Islay spirits that Lost Spirits has run through its “reactor”. Luckily, the dancers took hologramic one dollar bills since that’s what came out of the hologramic ATM machine onboard. 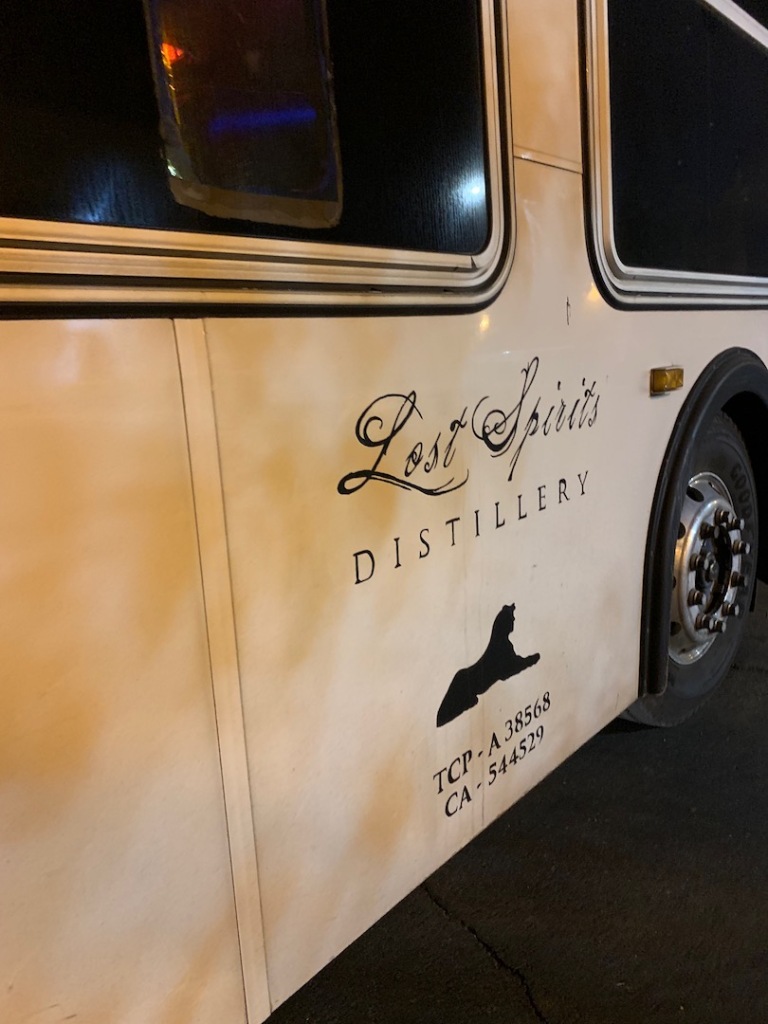 The comfy coach landed us back at Lost Spirits where we parted ways with our hosts, Bryan and Joanne. We offered many thanks for another stellar and entertaining adventure into the heart of the jungle and into the center of the weird science and beautiful minds of this fascinating L.A. destination!

The fine folks at @drnxmyth were kind enough to send us 5 different #ReadyToDrink #cocktails for us to try at #TheMurderTable.
On today’s episode of A Tasting at #TheMurderTable, we sample a flavored #IrishWhiskey called @dublinerwhiskey & Honeycomb.
Episode 13 of the
Those crazy brewmasters at @perrinbrewing are at it again.Three IPAs with escalating ABVs and escalating IBUs. We reviewed them.
Another day, another canned #Cocktail!
Which Drink Pairs Best with @mackiesofscotland Haggis and Black Pepper #Crisps: @irnbru , @etcc_uk Whisky Tea or @ardbeg Wee Beastie?