Beautiful Boozeography courtesy of Sarah Baumberger Photography. Click the pic to see more of her work.

We recently received an email from The Baddish Group regarding a holiday friendly cocktail called The Apple Claus. This recipe which features Four Roses Small Batch Bourbon as the main ingredient was created by bartender Laura Moore of EDGE Social Drinkery in Tampa, Florida’s The Epicurean Hotel. The Baddish Group asked if we’d like to give the recipe a try and share it with you, our loyal readers. Since we’re big fans of Four Roses Bourbon, we happily agreed to recreate this cocktail at The Barthenon and run it through our rigorous review process (i.e. we made it, drank it, and then scribbled a few notes down about it). Before we get to our review, here’s the recipe:

Method: Shake and strain into a chilled coupe and top with sparkling wine (Prosecco, Champagne or Apple Cider.) Garnish with an orange twist or apple slice.

And here’s what we thought of The Apple Claus… 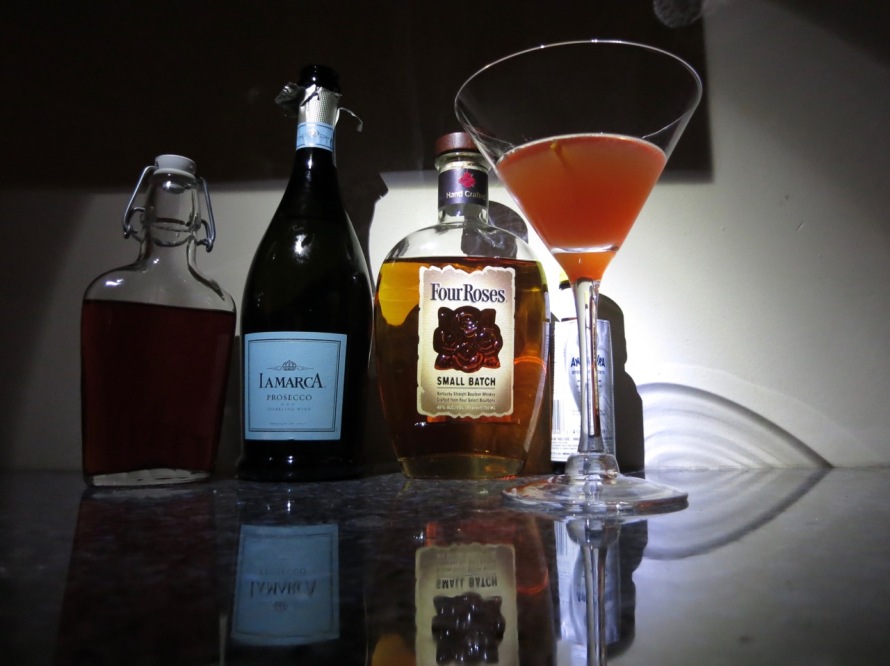 While I definitely liked The Apple Claus, I didn’t love it. The dominant flavors of apple, cinnamon, and lemon were quite pleasant at first, but by the time I got to the end of my drink, the Lemonhead / Red Hot candy flavors lingered for just a little too long, so the day after my research session at The Barthenon, I decided to do a bit of cocktail tinkering at The Murder Table (Limpd’s nickname for the massive island in the middle of my kitchen). My goal was to smooth out the flavors and make this drink much more session worthy. Here’s what I came up with…

Method: Dry shake the first four ingredients until the egg whites get good and frothy, then add ice and shake gently to chill the drink. Strain and pour into an ice filled Old Fashioned glass. Garnish with an orange twist and a dash of Angostura Bitters on top.

This was a definite improvement over the original recipe thanks to its having less lemony bite and less cinnamony sting. Santa’s Frothy Apple Whisky Sour was a much more cohesive drink from a flavor perspective (everything came together beautifully!) and the mouthfeel was silky smooth. It’s a definite winner! Mr. and Mrs. Limpd concurred.

Many thanks to Gabby Hamilton of The Baddish Group for sending the Four Roses Small Batch Bourbon and for sharing this recipe with us!