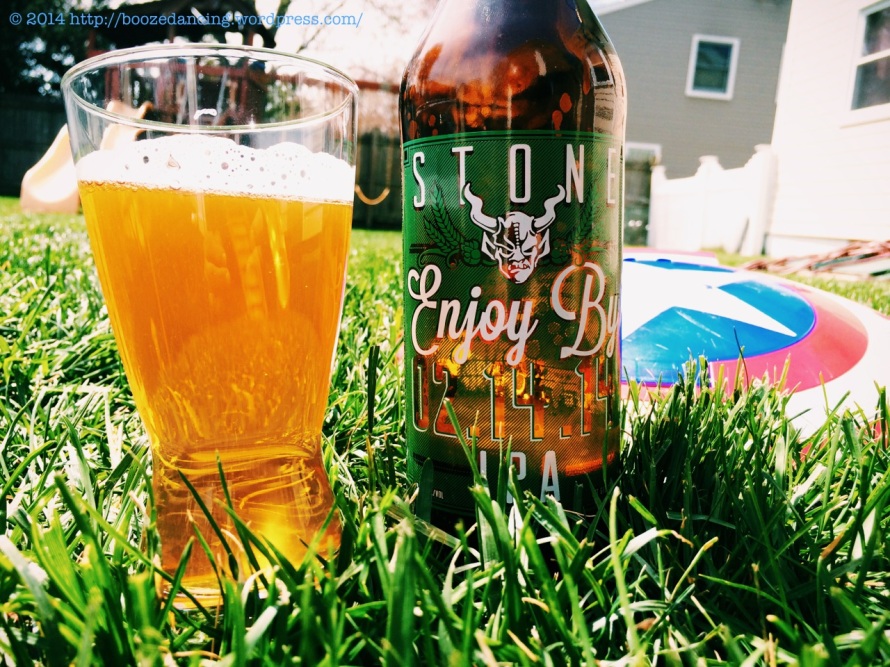 Well, I purchased a bottle of Stone’s Enjoy By IPA and placed it in the beer fridge without paying a whole lot of attention to its location. Apparently, the label didn’t really sink in either. So, on 04/20/14, I cracked open the Enjoy By 02/14/14 IPA and split the bomber with G-LO. His first comment questioned my ability to read; not just the big letters on the bottle but my actual ability to read. His next comment concerned his reluctance to participate in the review as he wondered what a “fresh” bottle might taste like.  His final comment revolved around his love of West Coast beers and how this old, dated bottle with questionable handling might ruin that for him. At this point, I once again confirmed that I need to put up a bigger fence. Anyway, I am a big fan of Stone Brewing and was intrigued by the pretty bottle with the scripted lettering. I guess I should have taken the label seriously and drank it immediately but my procrastination knows no bounds.

Before we get to my review, here is what Stone has to say about the Enjoy By IPA:

You have in your hands a devastatingly fresh double IPA. While freshness is a key component of many beers – especially big, citrusy, floral IPAs – we’ve taken it further, a lot further, in this IPA. You see, we specifically brewed it NOT to last. We’ve not only gone to extensive lengths to ensure that you’re getting this beer in your hands within an extraordinarily short window, we made sure that the Enjoy By date isn’t randomly etched in tiny text somewhere on the label, to be overlooked by all but the most attentive of retailers and consumers. Instead, we’ve sent a clear message with the name of the beer itself that there is no better time than right now to enjoy this IPA.

I found the beer to be…

Overall, I found the Enjoy By IPA to be quite refreshing and easy drinking. I’m not sure if the bottle lost a little of its character drinking it over two months beyond the Enjoy By date, but I liked it.

Can a 95 calorie #Lager be full of flavor AND gentle on your waistline? @oskarblues created Oskar’s Lager to be just that. And we got to try it!
Yo, Fellow #SouthJersey Folks! @kokororamenusa in #CherryHill is well worth a visit! @chuck_the_artist_ gives it an 8.5 out of 10. I concur.
#Ramen time!
We like #whisky with a 5 in it.
What do @jeopardy and the late great Alex Trebek have to do with #CraftBeer?
Love Is In The Air on this very special #ValentinesDay edition of the #WhatWeWatchWhenWeDrink #podcast. We're talking #RomComs (and so much more!) while we sip #Scotch, #Ginquila , and #Mezcal. We also bid farewell to The Dearly Departed.