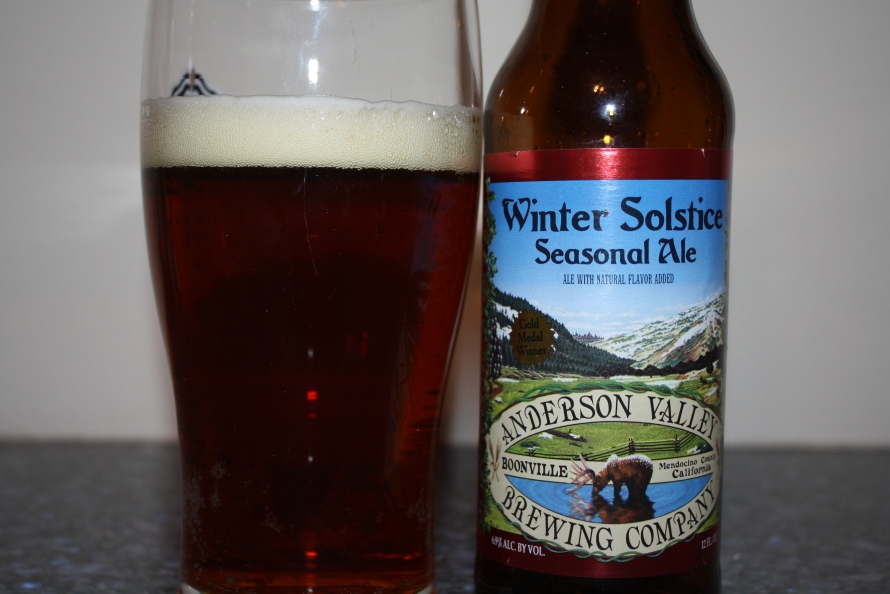 Now, that I think I have finally finished all of the pumpkin and Oktoberfest beers, I have moved on to the winter ales. The first on that I have tried is the Winter Solstice Seasonal Ale from the Anderson Valley Brewing Company . Located in Boonville, CA, AVBC has been in operation since 1987. Presently, they produce 8 beers year round, two solstice brews and the limited edition Bahl Hornin’ series, (that means “good drinking” in Boontling). In the past, we have reviewed the Summer Solstice. the Boont Amber Ale, a three can effort (the Boont Amber Ale, The Hop Ottin’ IPA and the Barney Flats Oatmeal Stout) sent fresh from the brewery and the Imperial IPA. Having had some mixed opinions of the brewery, I decided to give the Winter Solstice Seasonal Ale a try.

Here is what Anderson Valley has to say about their Winter Solstice:

Each year, when people are starting to unpack their winter clothes and replenish their firewood, our tiny brewery in the coastal redwoods of Northern California makes seasonal preparations of a different kind. As the cold arrives, we release a unique beverage created to add warmth to even the coldest and darkest of winter’s days. Winter Solstice Seasonal Ale begins with a very high original gravity to create a hearty and spicy brew with a deep amber hue and a smooth finish. Anderson Valley Brewing Company wishes you the very best for the holiday season and the New Year.

I found the Winter Solstice to have the following characteristics…

This was an okay beer. It was not overly spiced like some winter warmers; just a well-balanced blend of malt and hops even though I would have liked a little longer finish.

He’s no Fast Eddie Felson. But he had fun. And that’s all that matters. #ItsJustAGame
My #BetterHalf was kind enough to share a couple of @highnoonsunsips libations with us, so we just had to review them. Click play to hear all our thoughts.
#Chocolate
THE #MarcellaHazan tomato sauce recipe kept popping up so I finally decided to try it. So so worth it and soooooo easy. Tomato. Butter. Salt. A whole onion sliced in half. And a touch of sugar.
Steer right!
We’re trying 3 #BoozyTea expressions from @theowlsbrew on today’s video. They’re made with funky tea and fruit combos. Click play to hear all about them!