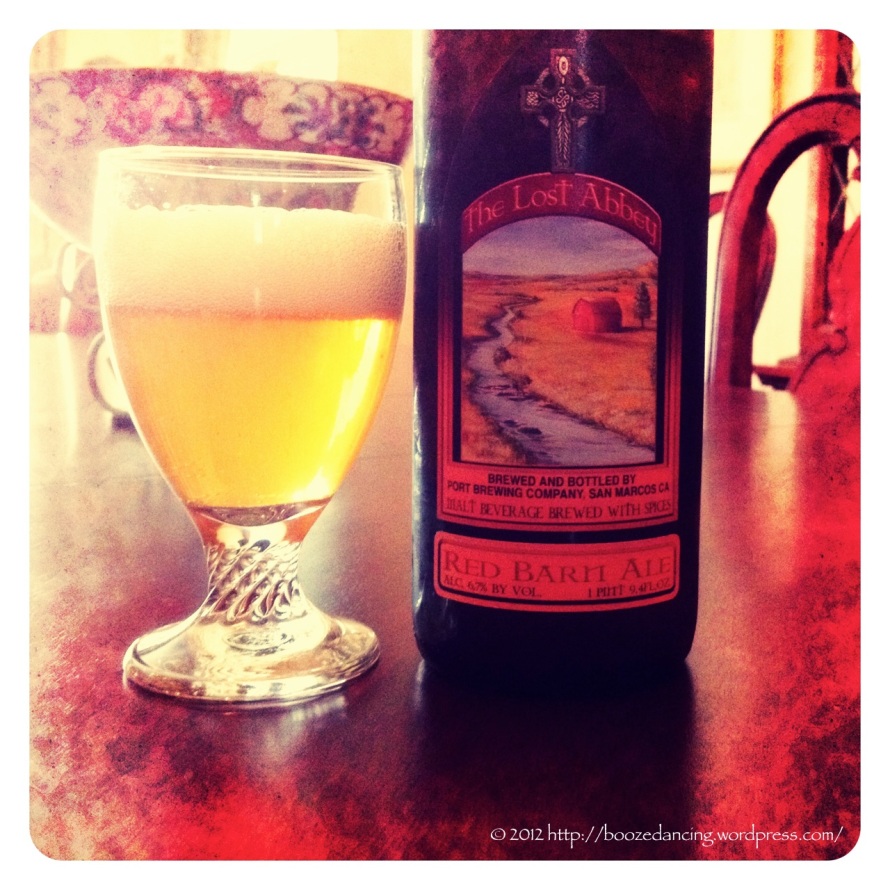 Whenever Father’s Day rolls around, I am usually befuddled by what to get my Papa, but ever since this blogging thing started, gift giving has become a whole lot easier. What do you give the man that has everything? Simple. Kick ass Craft Beer and Whisk(e)y!

In years past, I have gone out on a limb and bought him beers that I’ve never had before, but this time around, I decided to go with beers that I was sure he would enjoy. This past Father’s Day, I gave my Papa the following Craft Beers: Chatoe Rogue Good Chit Pilsner, Goose Island Sofie, and The Lost Abbey Red Barn Ale which is the subject of this review. Essentially, I gave my Papa the greatest gift of all: the opportunity to share a beer with his favorite son (I am also his only son. Funny how that works).

Here is what Tomme Arthur of The Lost Abbey has to say about their Red Barn Ale:

I first had The Lost Abbey Red Barn Ale at The Pour House in Westmont, NJ back in January (click here to see a pic from that night) during their New Jersey Launch tour (they were unavailable in our area prior to January of 2012). I loved it then, and I love it now! This beer is exceptionally smooth, easy drinking, and very different from all of the other Farmhouse Ales that I have been drinking over the past couple weeks. The Red Barn Ale is a much more subtle interpretation of a Farmhouse Ale, and it goes down so easy that you would never know that it has an ABV of 6.7%. While I truly enjoyed it alongside Mamma’s home cooked Italian meal this past Sunday afternoon, I could also imagine having this on a warm, sunny day all by itself. For those of you that are somewhat put off by the usual funkiness that comes with a Farmhouse Ale, I highly recommend that you give this one a try. As The Wookie would say, “It’s fan-freakin-tastic!”. And my Papa really liked it too.

Below is a video by The Lost Abbey that was taken in New Jersey during their Launch Tour. The Alemonger, our good friend and Craft Beer Guru, was given the opportunity to say a few words (he shows up at the 1:11 and 6:12 minute marks) during their visit to the Garden State. Cheers!

#nightcap #strega #liqueur #delicious
It's time to discuss the other half of that @oskarblues tiki-inspired CANspiracy Mix Pack that recently landed on our doorstep. Round one was two Hard Seltzers. Round two involves two beers: Last Grog Tiki Wheat and Tiki #IPA. Click the play button to find out what we thought of them.
We paid a little visit to Boardroom Spirits on Thursday for a tour of their expanded facilities and a tasting of new and future #spirits. They’ve made some big changes since our last visit 3 years ago! Go to boozedancing.com for the full recap!
Tonight at 9PM EST / 6PM PST, we’re hosting a #LIVE tasting of Release #8 from @singlecasknation on our YouTube Channel, Facebook Page, Twitter, and the blog.
We took a little #fieldtrip to @boardroomspirits yesterday for a wee #behindthescenestour and a not so wee tasting of several new products and a few works in progress. And if all that weren’t enough, they sent us on our very merry way with some homework. All in all, a very worthwhile #roadtrip to Lansdale, PA! Many thanks to Tim and Mike for the hospitality and to @foodshelterpr for setting this up. Cheers!
Those crazy Kids at Boardroom Spirits are at it again! This time, they've bottled up two yummy sounding #ReadyToDrink #Cocktails made from all natural ingredients and their very own spirits. We tried their Vanilla Peartini and Blueberry Blush cocktails. Click play to hear all about them.