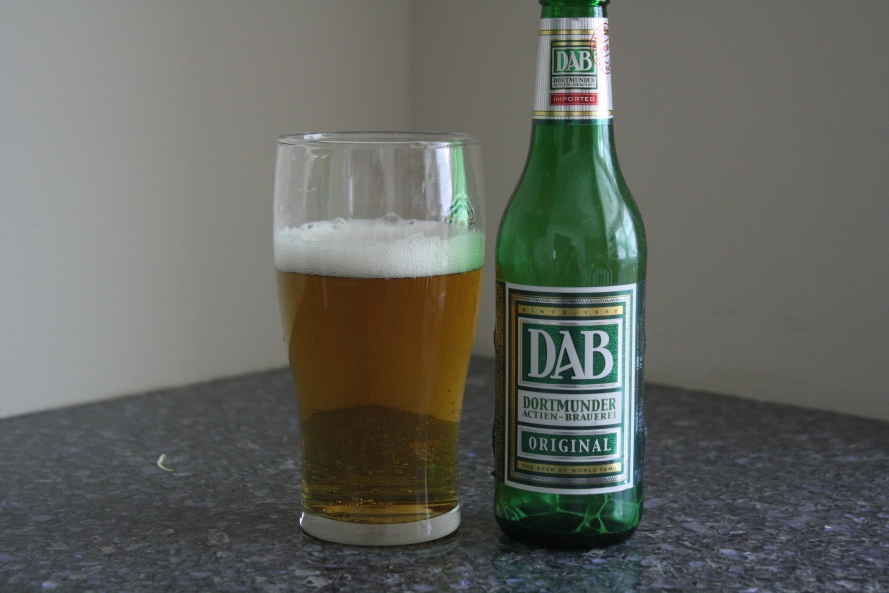 During a recent trip to Wegman’s, I assembled a mixed six with a predominantly English and German slant. I can remember my Pappy telling a story about a beer truck overturning and the driver passing cases of DAB beer to the firemen in gratitude for their rapid response. So, with a nostalgic thought in mind, I picked up the bottle of the Original from Dortmunder Actien Brauerei or DAB. DAB is a brewery that was founded in 1868 in Dortmund, Germany. By 1879, DAB was exporting to four continents and by the turn of the century, winning medals all over the world. Today, DAB is still one of Germany’s major export brands and exports to 20 countries worldwide.

Here is what DAB has to say about its Original:

Not just a beer. Not just a premium brew.
A beer with a glorious history.
A beer at home on every continent.
A taste that is appreciated throughout the world.
The model for many of the world’s beers.

I found the DAB Original to be…

The DAB Original was somewhat refreshing and on a really hot day this could be a lawnmower beer. However, as I once again passed the glass over to my better half, her response, “this is like a Coors Light” was unsettling. I think this might be the German beer that bad pilsners and lagers might have used as source material. I was once again undone by my inability to search quickly from my phone as well as the green glass and shiny label. Curse my love of shiny things and my barely opposable thumbs.

We’re headed to #Panama for a review of @selvareyrum Owner’s Reserve #Rum. And when they say owner, they mean the fantabulous @brunomars !
Robert Cassell and his @new_liberty_distillery have launched a new line of #RTD #cocktails called @americanliquorcompany Canned Cocktails. We reviewed them!
Great to be back at @pjspourhouse for a @mainebeerco Woods & Waters! Oh and the food was pretty good too!
We sure drank mucho #gin and #rum during episode 15 of the #WhatWeWatchWhenWeDrink #podcast!
Looking for something that would be killer with BBQ or a deli sandwich on some seeded rye? If so, #BlindPickle might be the #HardSeltzer for you. To hear all our thoughts about this intriguing beverage from @deepellumbrewing, click the IGTV tab on or Instagram profile or click the link at the top of our profile to visit our YouTube Channel. Cheers!
So good to see #livemusic again! A bit of a haul to get from South Jersey to Sellersville, PA, but seeing @levin_brothers was worth every mile driven. Tony and Pete Levin put on a great show!