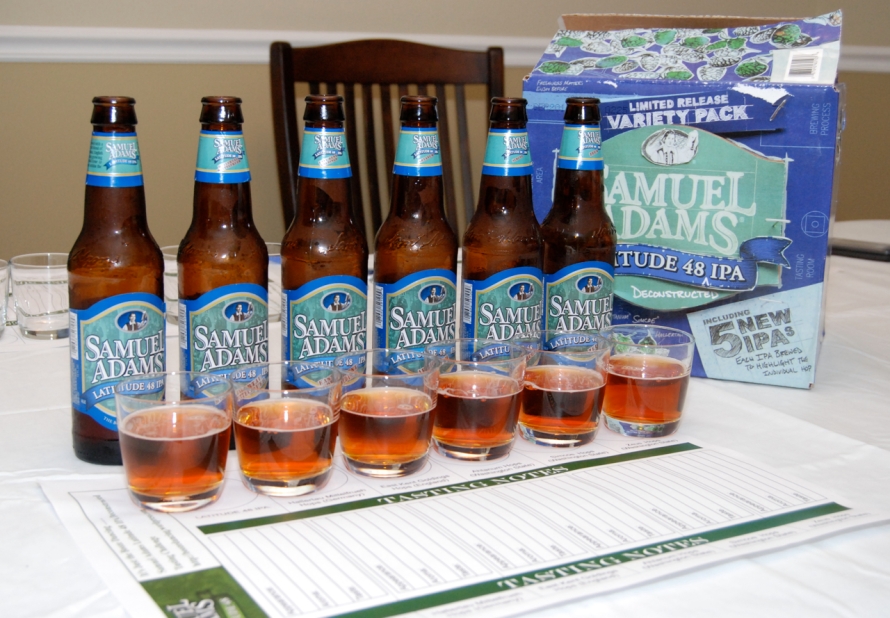 This past Thirsty Thursday, Limpd, The ROK, The Wookie, and yours truly got together in my dining room for a complete “deconstruction” of the Samuel Adams Latitude 48 IPA 12 pack that I found in my backyard, thanks to last week’s random “beering” by our friend, The Alemonger. Unfortunately, The Alemonger couldn’t join us, so we soldiered on without him. He has a 12 pack of his very own, so I’m sure he’ll leave some colorful commentary for us in the not too distant future.

For those of you that don’t know what this deconstruction business is all about, I first heard about this Samuel Adams release via a blog post by Jim Galligan of the Beer & Whiskey Brothers. If you’re not familiar with the Latitude 48 IPA, here is what the people at Samuel Adams have to say about it:

“Samuel Adams® Latitude 48 IPA is a unique IPA brewed with a select blend of hops from top German, English, and American growing regions all located close to the 48th latitude within the “hop belt” of the Northern Hemisphere.  The combination of hops in this beer creates a distinctive but not overpowering hop character.  The beer is dry hopped with Ahtanum, Simcoe®*, and East Kent Goldings hops for a powerful citrus and earthy aroma.  The hop character is balanced by a slight sweetness and full body from the malt blend.”

In a nutshell, this 12 pack contains 6 different IPAs. One with all of the hops listed above (THE Latitude 48), and 5 other IPAs made from each of the individual hops (the three listed above plus two more). Since I still consider myself a novice when it comes to craft beer, I thought this would be a great way to learn more about the art and science of craft brewing.

After a daily barrage of  “Are we gonna crack that case open tonight?” emails from The Wookie, we were finally able to get the four of us together for a proper tasting. Although we live within 100 feet of each other, mid-week obligations kept us from gathering until Thirsty Thursday. Seems fitting no?

The ROK and The Wookie arrived at 9:30, and we quickly started setting up for the tasting. In addition to the beer, The Wookie brought over a case of tasting glasses and a set of beer tasting place mats that he designed specifically for this event (click the link for your very own “limited edition” copy: Lat 48 – Tasting Flight Mat). Since Limpd wasn’t going to make it over until after 10PM (he blamed his tardiness on his kids. Shame on him!), we decided to start without him. Keep in mind that while all of this was going on, Mrs. G-LO was seated on the couch, catching up on all of her favorite TV shows, i.e. American Idol, Glee, and Nurse Jackie (for the record, we did extend an invitation to sample the beers, but she declined). Thanks to the Wife’s TV watching, we repeatedly had to redirect The ROK’s attention, since we caught him sneaking a peek at an episode of Glee on more than one occasion. Beer tasting is serious business. Focus Man! FOCUS!

Limpd arrived by 10:15PM, and he immediately started playing catch-up. He was up to speed within 10 minutes! We looked, sniffed, tasted, and took notes. At about 10:30, Mrs. G-LO decided that she’d heard enough of our comments, and headed off to bed. But before heading up, she popped her head into the dining room to see what we were up to. She was ok with the twelve bottles of beer. She was also ok with the tasting glasses and custom made place mats.  But for whatever reason, she was shocked to see a box of Carr’s Water Crackers that we were using as palate cleansers between rounds! I don’t get it. Anyway…

After the tasting was over, I collected our place mats and put them away until it was time to write this post. Although our penmanship is horrendous (I’m sure the beer didn’t help us to write legibly either), I think I was able to decipher our notes correctly. Here they are… 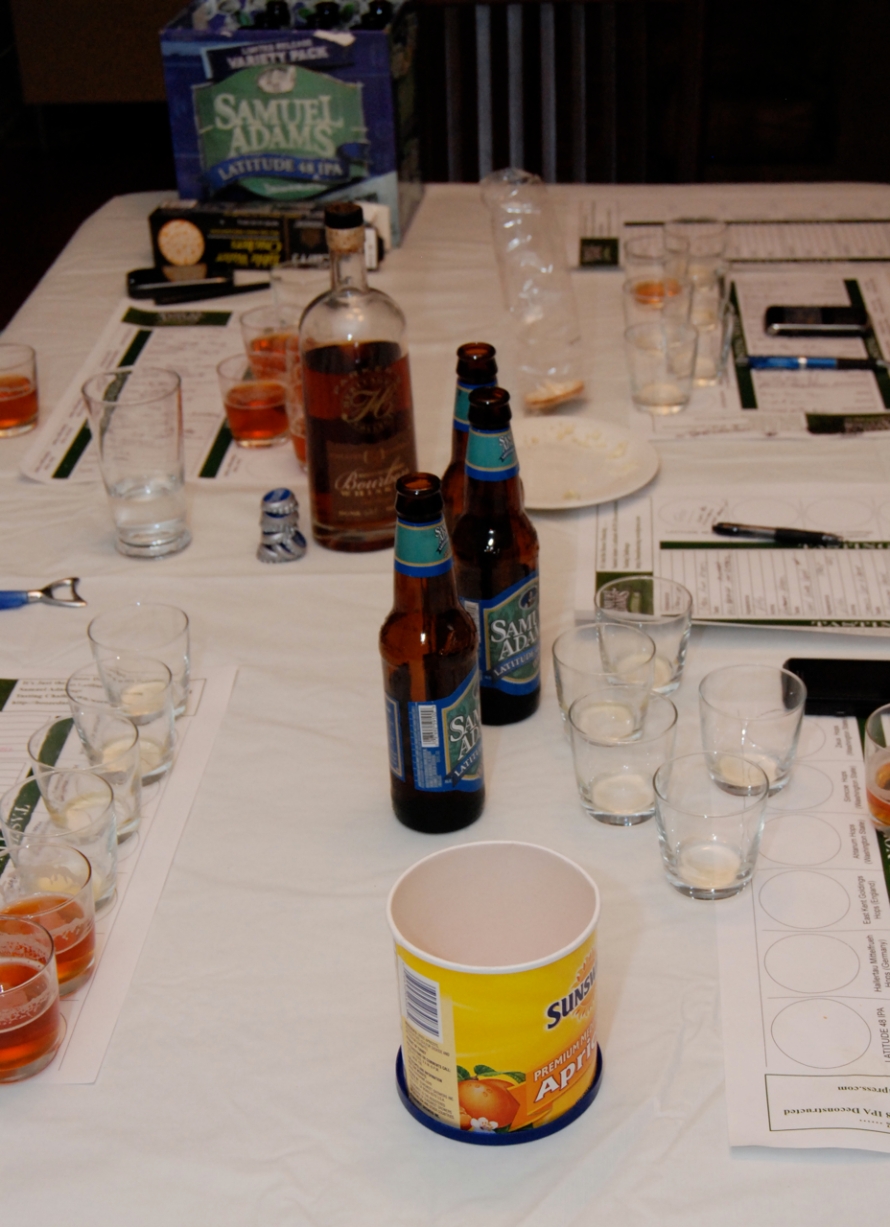 In case you couldn’t tell from our notes, we didn’t notice much of an appearance difference between these six IPAs. As expected, the biggest difference between them was in the aroma and in the taste. The Simcoe hopped version of the Latitude 48 was probably our favorite. It has that huge citrus bouquet and hop bitterness that we’ve come to enjoy from a world class American IPA (think Ballast Point, Green Flash, Stone, etc.). While the other four single hopped IPAs weren’t very special, it was a great experience to try them, and see how they stand on their own. I can now understand why a brewer would use more than one variety of a particular ingredient when crafting a beer. As far as the actual Latitude 48 IPA goes (the five hops version), it may not be world class, but it’s not that far behind either. I would classify it as a good, value priced IPA, or a great starter IPA for those that aren’t familiar with the style. Once again, I applaud Samuel Adams for bringing craft beer to the masses and teaching us about what goes into the making of a great beer. The Beer and Whiskey Brothers described it perfectly… the Latitude 48 IPA Deconstructed truly is Beer School In a Box!

A Craft Brewer and an Artisanal Baker walked into a brewery and this is the #beer that they came up with…
If light and refreshing libations are your game, @finlandiavodka_us has concocted something special for YOU!
Twas a good day to visit thr @philamuseum.
The off-centered brewers at @dogfishhead have brewed up a #Pilsner that they’ve named after Delaware’s state bird.
If you like your #coffee with a little somethin’ somethin’ added in, then @drinkbomani Cold Buzz might be exactly what you’re looking for.
After a brief “hiatus” (industry term), The Boys are BACK to drinking (@catoctincreek @kilchomanwhisky @impexcollection) and talking #TV and #movies.