In January and February of 1999, my wife and I were scouting restaurants for our wedding rehearsal dinner. One of the places on our list was Frankie’s at Night, a small BYOB Italian restaurant which was located on the 2nd floor of the original Shank’s at 10th & Carpenter in South Philly. When I met with Chef Frank, we briefly discussed the menu options and how many people he could accommodate on a Friday night. We originally thought that there would be about 15 to 20 of us in attendance, so Chef Frank offered to let us have the entire restaurant to ourselves, and if we paid him in cash, he would “bury the tax”. Since we actually had more than 20 people at our rehearsal dinner, we needed to find a bigger venue. We decided to have it at a place called Ozzie’s which no longer exists on East Passyunk Avenue. Although everyone had a great time at Ozzie’s, I think having it at Frankie’s at Night would have left us with some very amusing stories since Chef Frank was quite the character.

Although Shank’s is still in business, they are no longer at 10th & Carpenter. In 2009, they closed their original deli and opened two new locations: one on Columbus Boulevard in South Philly, and one on 15th & Sansom St in Center City. The fact that they were now just 6 blocks from my office put them high on my list of places to try for lunch.

Per the morning’s weather forecast, yesterday was supposed to be the best day of the work week. Since the weatherman appeared to have gotten it right, I decided to send Limpd an email and see if he was available to have lunch at Shank’s. Since his schedule was clear, he gave me a call and we decided to meet at Noon.

Here is a copy of Shank’s menu:

I decided to have the Chicken Cutlet Italiano sandwich and Limpd went with the Chicken Parmigiana sandwich along with an order of french fries. 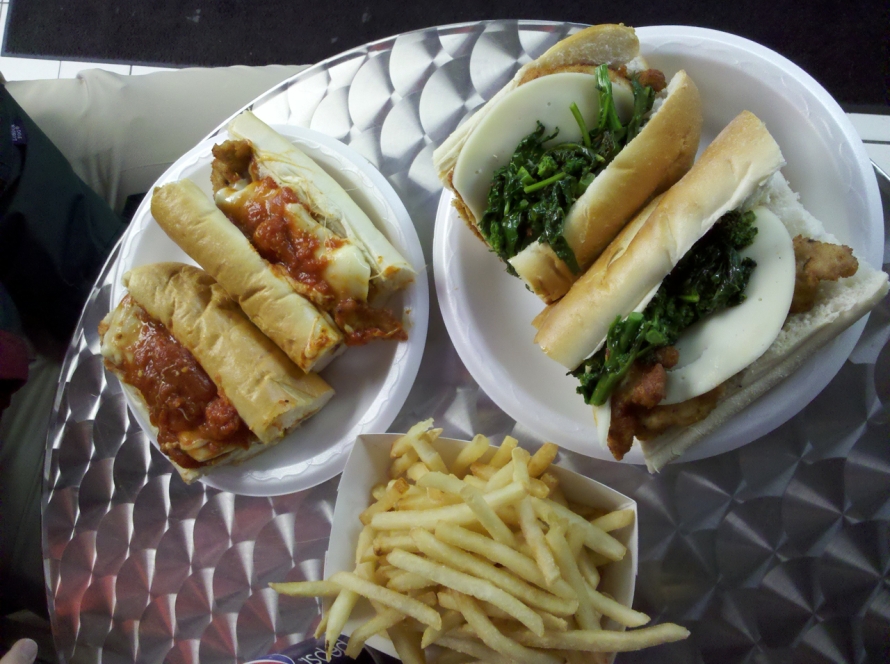 The Chicken Cutlet Italiano sandwich consisted of a fried chicken cutlet topped with sharp provolone cheese and sauteed broccoli rabe. The Chicken Parmigiana sandwich had a similar chicken cutlet, but was topped with mozzarella and a chunky tomato sauce. Although Limpd and I had no problem polishing off our sandwiches, we both felt that there was something missing. They were good sandwiches, but they weren’t great sandwiches. I think the following things would take the Chicken Cutlet Italiano to the next level:

Although the sandwiches could use some minor improvement, the fast service, reasonable prices, and great location make it a worthwhile place to have lunch. Overall, I would give Shank’s a B.